Justin Bieber Swept the Awards at the 2010 AMA’S 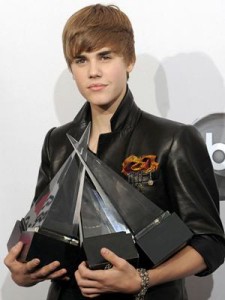 18 months ago, before Usher discovered him and helped him sign a contract with a music label, Justin Bieber was a normal teenager who lived in Stratford, Ontario (Canada), a town of barely 30,000 inhabitants; he never imagined he would become a pop idol who is the main cast in the dreams of millions of his fans. The young artist, 16, swept the awards at the 2010-American Music Awards 38th ceremony, held at the Nokia Theatre in Los Angeles, taking home the four statues of the four categories in which he was nominated.

The Canadian star won the award for artist of the year, defeating rapper Eminem, who was awarded with two prizes, best rap/hip-hop male artist award and best album for Recovery. The shaggy-haired boy also got the awards for best pop/rock album, best pop/rock male artist and breakthrough artist. In addition, Bieber performed his new song Pray, accompanied by a church choir.

Taylor Swift, Carrie Underwood and Brad Paisley were the winners in the country music genre while Shakira beat Enrique Iglesias and Daddy Yankee when she got the award for best pop Latin artist. British band Muse won its first award for favorite alternative rock artist.