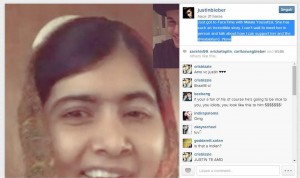 Justin Bieber posted on his Instagram account a photograph of him and Malala Yousafzai during a video conference accompanied with words of admiration for activist and a clear intention to support her foundation.

Malala Yousafzai, who defended their right to education in Pakistan, survived an attack by the Taliban militant group on 9 October 2012. From 2011, at the age of 14, she began a struggle for education after in her country was banned for girls to attend to school.

Canadian singer Justin Bieber wrote on his Instagram account “She has an incredible story. I can not wait to meet her in person and talk about how I can help her and her Foundation Malala Fund #love”.

The activist created her foundation to help girls between five and 12 years old to go to school in Swat, Malala’s home region of Pakistan.

In addition, she was nominated for the Nobel Peace Prize in 2013, but the award was given to the Organization for the Prohibition of Chemical Weapons (OPCW).