SPINAGAR-Kashmir. Every arrival at the emergency room is bloody, it is easy to imagine the gun-toting Indian police and security forces trying to control civilians with violence.

On an August day, three patients were the first ones to arrive: Habibullah Tiploo, his teenage daughter Sumaria, and his daughter in law Fátima arrived first. Relatives said that Mr. Tiploo was shot by armed forces outside his house; while Fátima and 17 year old Sumaira, rushed to help him, but they couldn’t escape from the bullets that reached their bodies.

Police statements mention that protesters were throwing rocks at a nearby bunker and the innocent Tiploos denied being a part of any protest, but were harmed during the cops firefight.

Protesters tried to enter the operating room by force, some of them were able to get through, grabbed Fatima’s hospital bed and moved it to the X-ray room while yelling the same phrases they yelled on the streets. 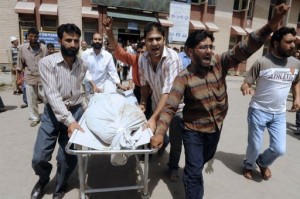 “The Kashmir which we have irrigated with our blood — that Kashmir is ours!” they claimed.

The melee was common enough at the hospital, the Sher-i-Kashmir Institute of Medical Sciences housed more than 500 patients who entered with bullet injuries, lacerations and bruises during the past three months.

Emergency room became a little version of Kashmir’s conflict, protesters took the streets turmoil into the hospital with them.

Srinagar hospital’s staff members have gotten used to such scenes, they occur on a regular basis since June 11, when thousands of people gathered on the streets to protest about Tafail Matoo’s passing away, a teenage kid who was hit by a tear gar canister.

65 civilians have died by the hand of security forces, because of the massive protests. There have also been countless injured people. 345 patients were received at the hospital in August; June and July combined had only 150 patients due to the conflict.

The strikes have taken place in the city continuously, protesters have been instigating for the independence of Kashmir. The prize of grazing a war between India and Pakistan, each have held a part of the territory since their separation, more than 60 years ago. The curfews ordered by the government to stop the demonstrations have effectively shut the city down.

While the rest of the city sleeps, seeking shelter in houses or being away of the windows because of the stones which are the favorite target for protesters. Doctors and paramedical staffs of the Kashmir Valley’s hospitals must still go out to work.

Many doctors complained of being caught in protesting mobs almost on a daily basis. 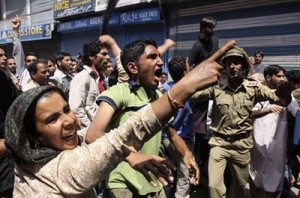 “We’re not allowed to pass by protesters or security forces, even if we go in an ambulance”, some said. The local news media have reported that some doctors have been harmed by police and security forces.

Representatives of the police and other security forces denied those allegations.

The principal of the Government Medical College in Srinagar and head of five associated hospitals, Dr. Shahida Mir, placed several hospitals under a state of emergency in the first week of August.  Since they can only perform few emergency surgeries because of the influx of trauma patients. She also complained about her doctors being delayed, harassed or turned back by security forces when trying to report for duty. “They put up such a stern face, the doctors get scared” she said.

Sumaira, the 17 year old Tiploo daughter, was injured in the chest with a gunshot, just like her father, while Fatima was wounded in the thigh. Fatima and Habibullah Tiploo were discharged quickly, but Sumaira stayed for weeks in the post-operative due to diaphragm and liver complications.