Labor and processes codes will be analyzed after legislative recess 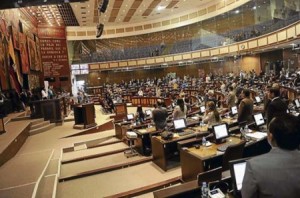 After the second recess of the National Assembly this year, which starts on Monday 4 and runs until August 19, there are several important laws that are pending for its analysis. Among these are the Codes of Labour, Process, and reforms to the laws of Social Security and of  Biess because of pension funds.

Gabriela Rivadeneira, President of the National Assembly, announced that in the second half the Labour Code will be treated. The current draft proposes full stability for workers and monthly allocation of the annual bonuses.

Legislator Luis Fernando Torres, said that with the approval of the Process Code in the first debate, this project will “revolutionize” the litigation system in the country because it incorporates orality”. Lawyers need new skills and judges more knowledge,” said the Assemblyman.

During the first debate of the reforms to the Social Security laws and the Bank of the Ecuadorian Institute of Social Security (Biess), it was known the initiative which seeks that pension funds are administrated by the Biess.

The President of the Committee on the Rights of Workers and project sponsor, Betty Carrillo, said that the financial institution will ensure profitability, liquidity and solvency of resources.

The Legislative Council of Administration (CAL for its Spanish acronym) currently has 22 pending documents, which must be treated after the break.