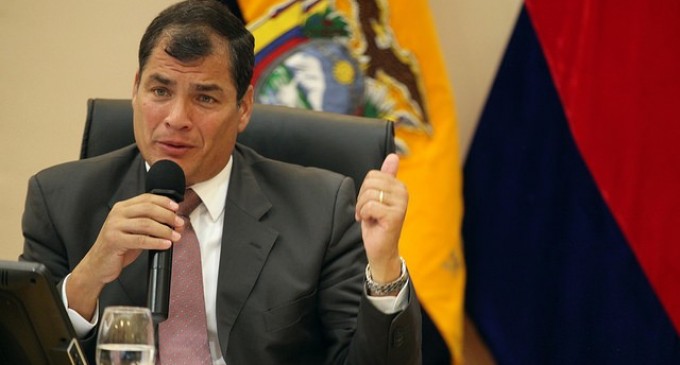 President Rafael Correa was ratified in the project to reduce 80% of the earnings of workers in telecommunications companies (from 15% to 3%). On the morning of August 1 in an interview with local media in Bucay, he questioned that some of the profits of the telephone companies is divided only among 4,500 workers.

He added that currently the companies distribute $ 130 million profits among workers and that with the proposed reduction there would still be $ 30 million to be distributed, which would mean between $ 6000 and $ 7000 for employees, something he  considered “reasonable “.

“Which one of you receives an average of $ 27,000 in profits? Why based upon our radio spectrum 4,500 citizens will receive that? But the worst, that’s why the company can pay the workers the minimun salaries on the most profitable businesses in the world and these transnational corporations are filling their pockets”, said in an interview

The reduction workers profits created an uproar on social networks. The claims were felt on Twitter after 04:03 on Thursday 31, August, when the President commented that for the weekly address of August 2 he would clarify issues as “telephone profits, supposedly private funds.”

Among the pronounced users was Nayid Ortega, who commented: @MashiRafael Mr. President, good afternoon. With respect, thanks to the profits my lifestyle has improved. I voted for 35 because I trusted you.

To this, Correa responded: “@nayidjoseortega how much is your salary? That’s what they should improve on the world’s most profitable business. They are still 30 billion in profits. “

The Twitter user finished saying: Please think about the debts that we have with houses and cars we get in long term.