BREAKING NEWS
A judicial complaint and protests against the CNE councilors announce supporters of Álvaro Noboa so that his candidacy is registered
Justicia Social announces legal battle to register Álvaro Noboa
Sylka Sánchez announces lawsuit against CNE advisers
Álvaro Noboa supporters announce legal actions to register his candidacy
Petroecuador’s IPO, good news for Wall Street
Contentious Electoral Tribunal notifies the CNE of the ruling in the Social Justice case
TCE refers a case of Social Justice for an electoral judge to execute a reparation sentence for candidacies, among them that of Álvaro Noboa
Citibank stopped payments on Isspol’s global investment notes to assist with the investigation
Ecuador presents public policy of accessible and inclusive tourism
Fundamedios supports the journalist who revealed the unusual requests in jail 4 in Quito 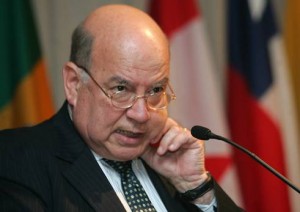 The Secretary General of the Organization of American States (OAS), José Miguel Insulza, expressed the concern for lack of progress in Venezuela’s dialogue today during the inaugural 44th session of the General Assembly.

The official said that “the dialogue (in Venezuela) does not advance, but we still believe that the only solution (to the problem of the country) is the dialogue,” and motivated the government and the opposition of Venezuela to persist in this way.

He also urged the international community to participate in the search for peace in Venezuela “without pressure and sanctions.”

Within his speech, Insulza spanned and recalled the importance of the OAS in the continent and highlighted the achievements over the years in the form of numerous legal instruments adopted since its creation.