They are deposit receipts and checks that go from June 2012 to October 2016, and which reveal ten banking operations in the accounts of Santiago Cuesta Caputi and his current wife Gloria Vinueza. According to information from the Las Torres case file, there are income for $ 345,000 deposited by Naparina Corp SA and its owner Enrique Cadena Marín, oil intermediary, and outflows for $ 122,400 for Jaime Baquerizo Escobar, a Petroecuador contractor who is at large. , and his father Jaime Baquerizo Chávez. 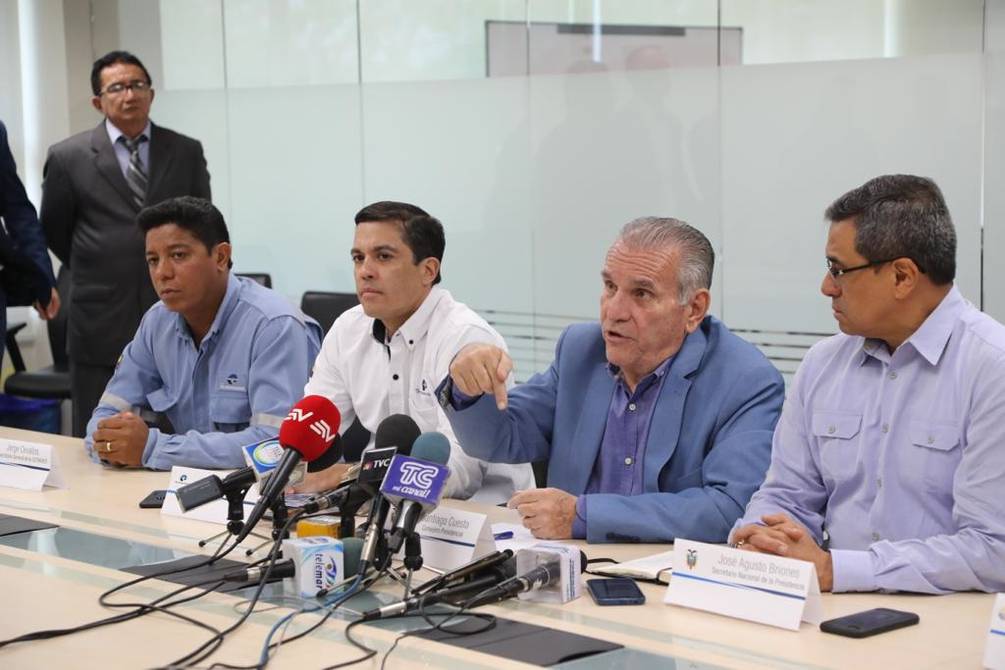 All the documents are part of the criminal assistance sent by the United States Department of Justice earlier this year, in a flash memory of 82 GB. In this case, a group of public officials is being investigated for allegedly demanding bribes from Petroecuador contractors and other institutions to dispel glosses issued by the State Comptroller General’s Office. The crime was committed in 2019 and the investigation began with the arrest of Raúl de la Torre Prado and Roberto Barrera in Miami .

In the Las Torres operation, the Prosecutor’s Office raided the house of Cuesta Caputi, who was considered the strong man of the Lenín Moreno Government, however, the former adviser has not been linked or an order has been issued for him to come to testify. His name is mentioned in the transcripts of some recordings. At the moment, there are nine people prosecuted, among them, the deputy comptroller Pablo Celi de la Torre and his brother Esteban Celi, uncles of Raúl de la Torre Prado.

In the file, which already exceeds one hundred bodies, at least 32 refer only to the bank accounts of Santiago Cuesta, his wife Gloria Vinueza Urgelles and her brother, Julio César Vinueza, a renowned interior designer.

When asked by this newspaper about these payments, Cuesta indicated that he has “nothing to add” about his relationship with Cadena and that he had not read the file. His lawyer, the former president of the Supreme Electoral Tribunal Jorge Acosta, assured that these payments “are not of the least importance.” “What crime is it? Not every economic movement means an offense,” he said .

By June 2016, the reports of the Panama Papers of the Mossack Fonseca study had already been published in EL UNIVERSO , which contained the first oil pre-sale agreement between Petrochina International and Petroecuador, for one billion dollars, signed in July 2009. For each barrel of crude delivered, according to the Panama Papers, Cadena and Jaime Baquerizo would receive a $ 1 commission. Part of this money was paid in Panama at a screen company called Eston Trading. In the files there was also a commercial agreement signed by the other principal of Oil Services & Solutions, Juan Baquerizo Escobar, with Álex Bravo Panchano, then manager of Petroecuador, for an initial payment of $ 600,000 and a 10% commission on the new contracts that obtained in the future.

Not only the checks were included in the flash memory of the United States Department of Justice, but also the deposit or collection slips. There it is recorded that Gloria Vinueza deposited the checks written by Cadena in her Bank of America account, while the checks that Vinueza wrote in favor of Baquerizo were deposited in an account of this in the same bank, in an agency in Miami.

Cuesta is currently in Spain, because he underwent surgery. In a press release as a result of the raids in the Las Torres case, the businessman said he did not know about “purchases, sales, transactions, exchanges, debts or any type of oil negotiation that has been carried out between the Ecuadorian State represented by any of its authorities and any oil buyer or intermediary company ”.

Formally, Cuesta Caputi was advisor to the Government for the improvement of efficiency and optimization of the State , a position created for the businessman with Decree 417 of March 23, 2018. He had to monitor compliance with the fiscal austerity program and recommend actions to improve the efficiency of the State. His monthly salary was $ 4,000. The day his resignation was accepted, on September 10, 2019, the counseling was also eliminated.

Jaime Baquerizo Escobar was captured in Peru on August 18, 2016 . The Ecuadorian Prosecutor’s Office had linked him in the Petroecuador bribery case, which began with the revelations of the Panama Papers. Oil Services & Solutions (OSS) received $ 37.8 million in contracts from Petroecuador. OSS also built the San Rafael Health Center in Esmeraldas for $ 2.3 million, a work awarded by Strategic Ecuador.

Peru did not accept the extradition and Baquerizo Escobar received asylum, it is not known if he is in Peru or in Miami. His brother Juan Andrés was convicted in Miami after he confessed that he paid bribes to Álex Bravo and other Petroecuador officials to obtain contracts. In Ecuador, several former managers of the state oil company are convicted and deprived of their liberty, including Bravo and Carlos Pareja Yannuzzelli.

The Ecuadorian Prosecutor’s Office initiated an investigation more than three years ago into the pre-sales of crude oil carried out by Petroecuador with various companies, such as Petrochina International, PTT International Trading (Petrotailandia) and Unipec Asia Co. Limited. In the United States, the former Gunvor executive, Raymond Kohut, confessed that he paid bribes for $ 22 million to access Ecuadorian crude through this system of oil pre-sales. (I)