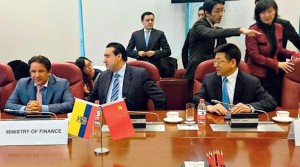 The commercial contract for oil sales to China was signed in January this year and was disbursed in February. This was confirmed by the law firms that advised the parties in this operation.

This is the first major loan of that country, in terms of amount, since January 2015, when the Asian giant pledged USD 7 000 million in funding for Ecuador, but this did not materialize last year “due to operational problems in Ecuador and China,” as recognized by Finance Minister Fausto Herrera, in December last year.

After a year of waiting, intense negotiations and trips to China, the Ministry of Finance announced on January 22 this year, through a press release, that Ecuador achieved a loan of USD 970 million, five-year term, with the Industrial and Commercial Bank of China (ICBC).

According to official information, resources were expected to arrive in two tranches: $ 820 million immediately and “later” another 150 million.