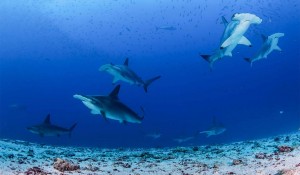 Hosting the greatest sharks biomass of the planet, having the most important route of whale sharks in gestational state and holding the last coral reef of the Galapagos Islands earned the marine environment of the Darwin and Wolf Islands, located in the northwest corner of the Galapagos Archipelago, recognition as Marine Sanctuary in Ecuador.

The decree that makes official the implementation of a new zoning for protected areas of Galapagos, including the designation of Marine Sanctuary for the north of the archipelago, was signed yesterday by president Rafael Correa.

The economic slowdown was felt in private banking in 2015