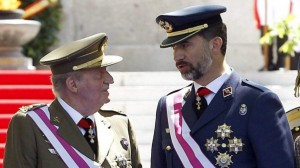 Prince Felipe de Borbón will officially succeed his father Juan Carlos, who abdicated his reign of 39 years in Spain on Monday June 2, 2014.

In the proclamation ceremony, at the Congress of Deputies in Madrid and which will be June 18, will exhibit the crown and scepter, excellence symbols of the monarchy.

The head of the Department of National Heritage Conservation, Álvaro Soler del Campo, said the size of the crown, “much greater than normal,” it is precisely because of his “ceremonial character”, not for the king to be crowned but for display the symbol in his proclamation.

One of the challenges of the future King, who is 46 years old, will be the rise in Catalonia independence, where a referendum is expected for November 9.