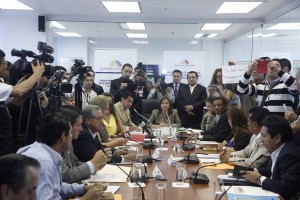 Tomorrow will be held the second and final debate of the bill for Labor Justice. (source: El Universo).

The second and final debate of the Labor Justice and Home Labor Recognition bill, which aims to make changes to the subsidy of IESS, unions, payment of bonuses and profits, elimination of fixed-term contracts,  among other issues, will be held tomorrow. The new reforms have have resulted in contest between authorities of the ruling party and opposition sectors, since the first indicate that these reforms imply an improvement in working conditions, while the opposition considers that these measures violate the rights of workers.

According to Cristina Reyes, Assemblywoman (PSC), this bill does not contemplate the rights of workers stipulated by the ILO (International Labour Organisation), as she ensures that there should be an agreement between the three parties: workers, employers and the State, however, she made reference to preliminary bill, submitted by the Ministry of Labour, reason why President Correa announced the implementation of “specific reforms” late last year.

On the other hand, for Fausto Cayambe, Assemblyman (AP), and a member of the Commission on Rights of Workers, these reforms promote the rights of workers. But most those who have spoken out against these reforms are the retirees, due to the elimination of 40% state contribution. Reyes points to a unconstitutionality lawsuit, on issues such as the limit for the payment of profits and the abolition of the state contribution to social insurance.