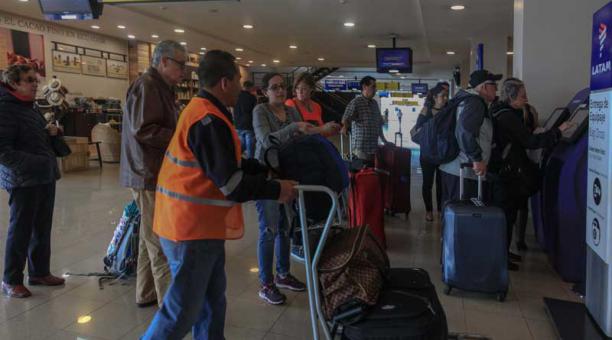 The increase of four daily flights by airlines Latam and Tame and the entry of two new companies, which will operate from the end of this month, improve connectivity to Cuenca.

Since the beginning of last March, Latam increased a daily flight on the Quito-Cuenca route and the return. In addition, Tame resumed the route Guayaquil-Cuenca-Guayaquil, at noon. With this, it went from eight to 12 daily flights and increased 400 passengers per day. In the air terminal, cafeterias and premises there is a greater movement of people, in relation to the previous months.

According to the user Monica Rodriguez, it is easier to get a flight according to your needs. Before it had to adjust to the free spaces on airplanes and travel in advance. The increase in flight forms is part of the Flight Increase Plan promoted by the Airport Corporation of Cuenca (Corpac) and the Ministry of Transport and Public Works to reactivate the economy of the Mariscal la Mar airport.

By the end of this month, the income of the Aero Regional and Conecta Air companies. The first will have a plane assigned to Cuenca to connect at 06:00 with Quito. From there it will fly at 08:00 in the direction of Guayaquil. One hour later it will leave from this last city to the Azuaya capital. At 16:00 the same day it will complete its service with the routes Cuenca-Guayaquil-Quito-Cuenca.

The cost of the ticket will be USD 160, between round trip and return for these three cities. Aero Regional will operate with a Boeing 737-500 aircraft, with capacity for 130 passengers. As part of the requirements demanded by the General Directorate of Civil Aviation (DGAC) to obtain operating permits, this company has already rented an office at the Cuenca air terminal. Currently, Corpac officials await notification of the test flight. Instead, Conecta Air will provide air taxi service by renting the plane for flights to cities such as Esmeraldas, Manta, Loja, Santa Rosa, Guayaquil, among others.

This company will operate with a Cirrus aircraft, with capacity for three passengers plus the pilot and a price of USD 300 per flight. With the highest number of connectivity frequencies, the Corpac projects a 5% increase in passengers during 2018. For the director of the Corpac, Carlos Jácome, the increase in passengers will help overcome the crisis that has dragged this airport since 2013. In 2015, a total of 458 897 passengers used the services of this air terminal.

In 2016 it dropped to 240,000 and last year it was 310,400. “In the last 10 years, no new airlines have arrived at this airport,” Jácome said. He added that the city does generate demand for flights mainly from academics, businessmen and tourists, but the offer was always restricted. This was confirmed by Martha González, manager of Corporate Affairs at Latam, who explained that the Quito-Cuenca route has an occupation factor that exceeds 80%. “The flight increase was made considering the crisis of seats generated in 2017.” This year, the Corpac will contract the studies for the integral rehabilitation of the track of 1 900 meters in length. These works will be executed in 2019 with an investment of more than USD 10 million. For the medium term an expansion is analyzed. (I)