Latin American women with employment disadvantages according to the UN 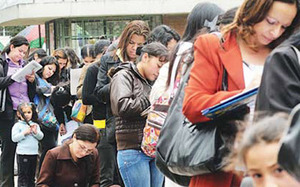 According to a report by five agencies of the United Nations (UN), the women of Latin America and the Caribbean are 1.4 times more vulnerable to unemployment than men, and their salaries are also lower.

The agencies in charge of preparing the report were the OIT, the Economic Commission for Latin America and the Caribbean (ECLAC), the Organization of the UN of Food and Agriculture (FAO), the United Nations Development Programme (UNDP) and UN women Fund.

The text that urged countries to adopt the gender equality as a priority of social policy, is entitled “Decent work and gender equality: policies for access and the quality of employment of women in Latin America and the Caribbean”, which was revealed at the XVIII inter-American Conference of Ministers of labour (IACML) that concluded in Medellin, Colombia.

According to the report, the unemployment rate for females in the region (9.1%) is 1.4 times higher than that of men, which is 6.3%. 44% of female workers comes from the urban environment, while 36% comes from the countryside, and on average they are between 25 and 45 years old.

Despite this, women are better prepared than their peers, as according to the figures that were revealed in the report, while the 53.7% of those employed had an education of more than ten years, only 40% of the males reaches that level.

Elizabeth Tinoco, regional director of the international organization of labour (ILO) for Latin America and the Caribbean, said during the presentation of the document that “is time to place gender equality as a general and cross-cutting objective of social and economic policy”, since “advances in equality of the past 30 years have been important, but insufficient”.

Djokovic is the ‘Master’ of world tennis