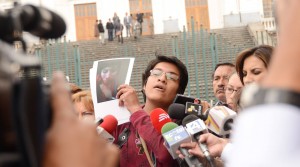 Gonzalo Realpe, President of the Lawyers Association of Pichincha, announced that two resources to defend 28 of the 53 students of the Mejia school still detained in the pretrial detention center (CDP for its Spanish acronym) are being prepared. These are: A constitutional writ of habeas corpus and an appeal of the remand order to avoid the conviction of the students.

The trial hearing is scheduled for Monday. For that, parents requested the intervention of the Red Cross, as some claimed that their children were physically assaulted.

The President of the Federation of Secondary Students (FESE for its Spanish acronym), Mauricio Chiluisa, insisted that the students arrested were mistreated, beaten by the police and keep incommunicated.

“As high school students of Ecuador we reject the policies undertaken by the government to crackdown on the student movement, they will not silence our voice,” said Chiluisa.