Leader of the regime criticizes the corruption in the police 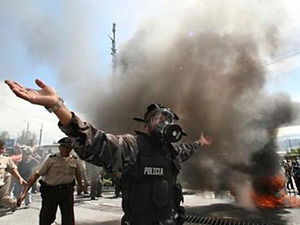 The regime leader, Rafael Correa, stressed that the police still have remnants of “corruption” in their ranks, while the armed forces are the “largest landowners in the country.” Correa explained this while commemorating the three years of the police insurrection of September 30, 2010.

Despite acknowledging that they have positive things, the president said it was wrong that the police had administrative and financial autonomy and are receiving salaries of “foreign powers“. While the bad thing of the Armed Forces is to continue to maintain the land.

“(…) Many lands that were held by the Ministry of Defense, Fort Huancavilca were sold a year ago to ISSFA (Social Security Institute of the Armed Forces) to one cent per square meter and was sold to us $ 20 square meter. Currently, the military (…) are the largest landowners in our country, while we have landless peasants,” claimed the regime leader.