Legislative and Executive prepare their reforms to the LOC

The President ordered that the Communication Secretariat lead the national dialogues, already carried out in all the provinces, to collect citizen contributions and thus amend the communication law.

The inputs are in the process of being systematized, then they will be incorporated into the project to be presented in February. Contrary to what several political leaders proposed, especially as a result of the last presidential elections, none of the citizens who participated in the dialogues promoted by the Secretariat of Communication (Secom), to collect criteria on the Organic Law of Communication (LOC), They were in favor of repealing it.

That is why they contributed with several topics aimed at improving the regulations that have already been in effect for four years, in which they have raised criticisms related to freedom of expression and punitive nature, whose executing arm has been the Superintendence of Communication (Supercom). “In the workshops in which more than 1,500 people from all interested sectors participated, they provided input to reform the law, which at the moment is in the systematization phase to include it in the project that we will present at the Assembly possibly in February,” assured the undersecretary of communication Fabricio Cevallos.

The official recalled that on June 20, 2017 President Lenin  Moreno signed Decree 49 that established the strengthening of citizen spaces to address issues of social interest, one of them was communication, “we carried out this dialogue on behalf of the President, which we coordinate with the National Secretariat of Planning (Senplades) and the Secretariat of the Policy and carry it out in eight meetings in different cities according to the zonal division for people from all provinces to attend.”

Cevallos commented that the contributions focused on the rights of communication, regulation, control, advertising and national production. Other aspects discussed were the economic support and technical training to community media so that they form a national network. It also spoke of the increase of educational and cultural content in prime time schedules, in addition to promoting the broadcast of intercultural programs made by producers of peoples and nationalities to give more space to the original languages.

These proposals also touched on the need to review the sanctions and related to advertising, so that the financing of the media can be favored. In the same way the fines of the Supercom were questioned, “but neither was it proposed to disappear,” said the undersecretary.

Cevallos considers that the reforms will aim to remove the sanctioning aspect from that entity and transfer it to another instance “such as the Council for the Regulation and Development of Information and Communication (Cordicom), where a council composed of representatives not only of the government, but of civil society, academia, journalistic associations and private media, which would be responsible for reviewing complaints and sanctions.

According to data issued by the Supercom, at the national level, 30 administrative sanctions have been issued against media that did not comply with the right to rectification, from 2013 to 2017. A report prepared by the entity indicates that people have already empowered themselves with these rights and he exercises them. “A random sample of the Supercom reflects 926 requests for replication and rectification directly to the media, without intervention by the regulatory body”. 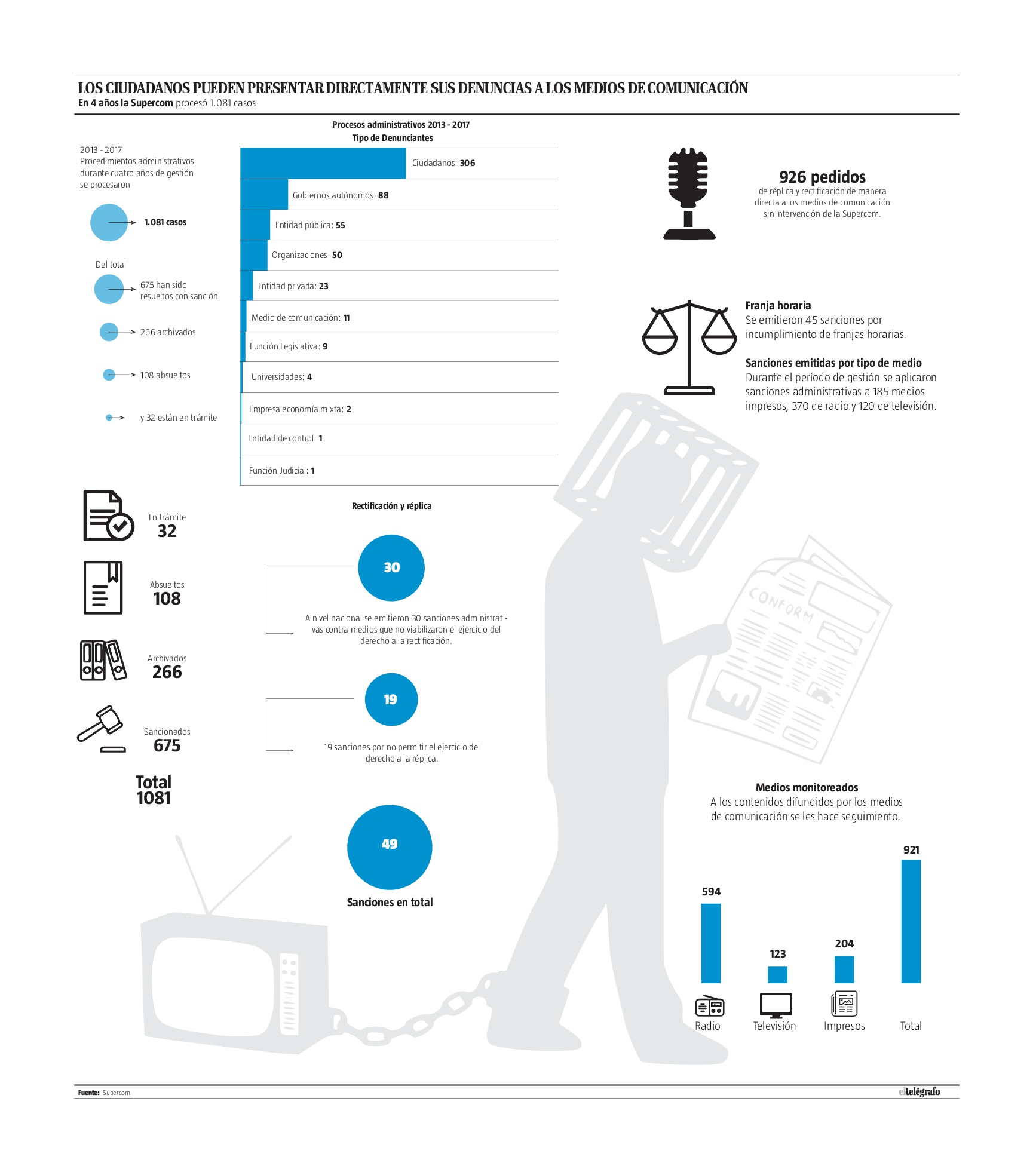 Legislators are also moving forward with their reform proposals to the LOC, in this regard Assemblyman Jorge Yunda of Alianza PAIS (AP), indicated that by January he will present the project that he said was also agreed with the citizens.

The Assemblyman agrees that the issue of sanctions in charge of the Supercom must be modified, “are disproportionate fines, punitive that in some cases could lead to the bankruptcy of the media.” He believes that this could be changed so that the fines can be paid with segments of interculturality, “which would be more positive than the economic penalty.” Yunda said that the law should also specify and clarify what is a means of communication, national, local, public or community, “we believe that national systems should be encouraged, true means that can be with a signal throughout the country.”

He clarified that this does not mean encouraging monopoly, “in the country there are 1,500 owners of media, which does not compare with Colombia where there are three owners who monopolize the national signal or in Peru that there are five, in Ecuador we do not have this problem, it is a subject that we must discuss. ” Mauricio Alarcón representative of the non-governmental organization Fundamedios, clarified that they have always expressed the need for substantive reforms to the LOC “so that it complies with international standards, are several points to discuss, because there are institutions worldwide that have challenged this law by example the figure of the media lynching”.

Alarcón said that the fundamental issue that must change is the punitive one that has not generated change “we must avoid that the rectification and the replication are used as an imposition of contents”. About the Supercom commented that it was an institution created at the last minute in an irregular manner, since the law provided for a Regulation Council, therefore “should disappear because it corresponds to enable a Council that ensures plurality beyond its sanctioning nature and become a promoter of freedom of expression.”

César Ricaurte is a journalist and director of the non-governmental organization Fundamedios. He has worked in different newspaper companies and today is an activist in favor of freedom of expression.

How do you see freedom of expression in Lenin Moreno’s government?

Undoubtedly the climate has improved for the work of the press. From the Executive there are no aggressions against the media.

This contrasts with the decade of Rafael Correa, where the main aggressor was the Executive. In the last months of his Government the aggressions increased, we came to report two or three daily outrages. So, are there any advances in the work climate of the press?

Yes, but the institutional and legal apparatus of the Correa regime has not been dismantled.

There are five laws that affect the work of the press: COIP, Antitrust Law, Code of Citizen Participation, Code of Democracy, Law of Access to Information. And, in addition, the institutions that control the press are still intact.

Last week Carlos Ochoa fined Teleamazonas because he did not pass a video that he sent them. This impacts, in the midst of this improvement in the media environment. It is a violent, disproportionate and abusive action. But this is how I have been acting for five years in which the Communication Law is in force. These impositions were daily bread. The newspapers forced them to publish designed pages.

What are the changes they propose to reform the Communication Law (LOC)?

Deontological rules must be eliminated because they violate the international principles of freedom of expression. Also the chapter of prior censorship, censorship by omission and media lynching. The reformed LOC must comply with international standards of respect for freedom of expression. Rabascall, an ex-interviewer from EcuadorTV, did not want to interview you and resigned.

What do you think about this?

He wanted to exercise censorship and that is unacceptable in a public environment. The public media was a propaganda mechanism at the service of the former government. They were also handled in a corrupt manner. Gama TV was broken and the contracts with the exponents were a form of corruption. “We all have legal frameworks to settle our differences”

The Superintendent has been questioned by the way he applies the sanctions to media outlets that consider that there is no defense opportunity. Teleamazonas points out that the resolution of the Supercom is unfair because in this process the entity was victim and judge?

In the first place nobody is above the Law. Neither Mr. Sebastián Corral nor Teleamazonas. We all have a legal framework in which we must resolve our differences. Noting that we are judge and party is a total error. We are not an organism with jurisdictional authority. We are an administrative body, we issue resolutions, we do not issue judgments.

Do you agree that this channel has been declared in default?

First I congratulate Teleamazonas because it goes to the legal terms, to the courts, to the law to settle a difference between the Superintendence and that channel. Nobody is above the Law. I want to remember that this figure, contemplated in the Constitution, can be applied when an organization has appealed to all instances and their rights have been unknown. Then there is the possibility of declaring in absentia, here we are just beginning a process, not even anyone has been sanctioned economically.

This sanction for the channel opened a debate on reforms to the Communication Law, until it has been proposed to eliminate the Supercom. What do you think?

Look at how there is freedom of expression in this country.

Do you think that a means of communication could generate criteria if there were no freedom of expression?

That is the clearest way to demonstrate that in the country, any media, any journalist can express what they think. Now, in Law, things are undone as they are. If Mr. Corral and Teleamazonas are bothered by the Communication Law, they have the legal areas to request its repeal, but as long as the law exists, it will apply. Recall that the Law had four years of debate in the Assembly and then it was approved and ratified in a Popular Consultation and at the time by the Constitutional Court. Eliminating it constitutes a regression of rights in my opinion.

The law has the mission to protect and regulate, the exercise of the rights to communication. It seeks an equitable distribution of radio and television frequencies. In addition to giving priority to national production 4 years the communication law is in force. On June 25, 2013, it began to govern as such.

Dialogue reforms. In the citizen spaces there are proposals to reform the LOC. The groups that most defended this legal framework came from local media, indigenous and Afro producers. (I)