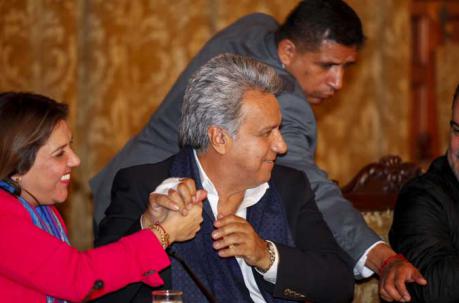 The president of the Republic, Lenin Moreno, sang a song about the yes. That was the way he celebrated the preliminary results of the popular referendum and referendum 2018, after 20:00 this Sunday, February 4.

The President was accompanied by Vice President María Alejandra Vicuña and the head of the National Assembly, José Serrano. “The yes that we promoted now becomes a commitment,” Moreno said, knowing the average advantage of more than 63% in the referendum and consultation that he promoted. “Democracy has triumphed today with the Yes,” he wrote minutes later on his Twitter account.

The Head of State heard about the results in the Salón Amarillo de Carondelet. In the morning he had called a meeting of his extended cabinet for 4:00 pm on Sunday. In the middle of the session, there was a pause to listen to the results that the National Electoral Council (CNE) issued at 20:03.

Moreno said that his regime will “deepen” the national dialogue. He thanked the voters and described the day as a “resounding” victory. He also reiterated that changes in the laws passed by the people at the polls will be processed by the National Assembly. Serrano applauded the intervention of the President, like Vicuña.

Hours before, in an interview for El Comercio, Serrano had said that they will have 30 days to make the changes in the Comprehensive Organic Code of Criminal Procedure (COIP), Code of Democracy and three other regulations.

The triumph of yes in question 3, in addition, supposes the termination of the functions of the seven members of the Council of Citizen Participation and Social Control (Cpccs), who will be in their positions until the Assembly designates the members of the Transitory Cpccs, of seven terns sent by Moreno.

The eventual victory of the yes (until 22:00 was recorded 55.48% of minutes) in question 2, meanwhile, implies a constitutional reform so that the officials appointed in a vote can be reelected for only once. “Politicians who yearned to be eternal will never return,” Moreno said on Twitter.

On the outsides of Carondelet, people expected a pronouncement from Moreno. However, the President did not go to the balcony of the Palace. Other followers concentrated on the av. Of the Shyris, in the north of Quito. There a platform was installed. Before 22:00, Moreno’s supporters left the place.

The Minister of Labor, Raul Ledesma, for his part, described the preliminary victory at the polls as a “beating” against those who voted for no. The official, who belongs to the Democratic Center (CD), assured that they will maintain the “cogovernment” with Alianza País (AP).

For his part, Ricardo Zambrano, executive secretary in charge of the AP, said that they will continue with the dialogues with other political organizations to have agreements. He ruled out that there will be no “distribution” of functions or positions to achieve these consensus. He advanced that in the legislative issue they will also seek to change the laws to “open spaces” so that there is greater national and foreign investment. (I)