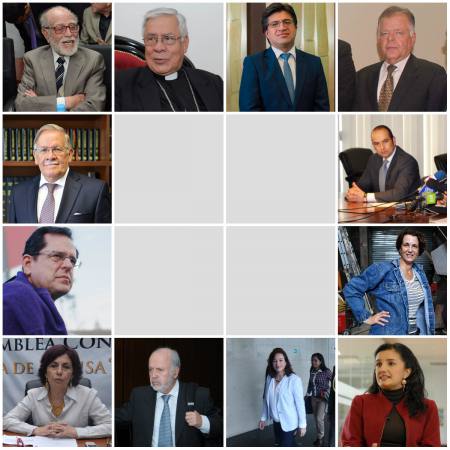 The twelve citizens suggested by President Lenin Moreno to join an Anti-Corruption Front began to react to the proposal made yesterday.

Pablo Vanegas, president of the University of Cuenca, admitted that days ago he knew about it through an official – whom he did not want to identify – who asked him if he would be interested in integrating the Front.

The academic said that his answer was affirmative, but he was surprised that Moreno made the announcement at a public event.
Vanegas said that for him it will be an “honor” to contribute in the fight against corruption.
Julio Cesar Trujillo: lawyer, activist and former legislator.
Fausto Travez: Archbishop of Quito and former member of the CEE.
Pablo Vanegas: President of the University of Cuenca and Professor.
Xavier Zavala: Legal expert, former Judge of the Court in the city.
Fabian Corral: Legal expert, member of the Academy of Language.
Pablo Davila: former president of the Chamber of Industries.
Carlos Rabascall: host in Ecuador TV.
Larissa Marangoni: sculptor and Director of Aprofe.
Tatiana Hidrovo: writer, former Legislator.
Francisco Borja: Former US ambassador, former Minister.
Maria Fernanda Espinosa: Chancellor.
Rosana Alvarado: Minister of Justice, former Legislator.
Sources: http://www.eluniverso.com/noticias/2017/05/30/nota/6206434/doce-invitados-frente-anticorrupcion