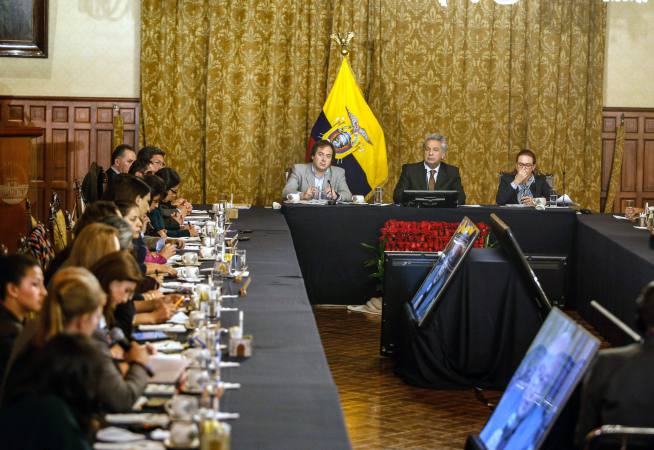 President Lenin Moreno said on Tuesday that Ecuador will fight the “interference” of dissidents of the ex-guerrilla of the FARC linked to drug trafficking, who are attributed the car bomb attack against a police station on the border with Colombia.

“Ecuador is not no man’s land, Ecuador has Armed Forces, it has a government that is ready to defend its sovereignty” in the face of threats from drug trafficking, the president said in a meeting with the foreign press in Quito.

He added that his administration will “fight in a tenacious manner, in a strong, forceful and resounding way this interference” of dissidents of the former guerrilla of the Revolutionary Armed Forces of Colombia (FARC), now a political party after sealing the peace with the government by Juan Manuel Santos. Moreno will meet with Santos on February 15 in the Colombian city of Pereira.

At the meeting, Moreno will ask his partner “co-responsibility (in the protection of the border) because it can not be possible that the problem originates there and we are the ones who have to pay for the

Ecuador will continue to protect Julian Assange, a refugee at an embassy in London since 2012, following the decision of the British justice to maintain the arrest warrant against him, Moreno said.

“The decisions that the court makes will undoubtedly affect, but they are not determinative of our decision, and we will continue to provide Mr. Assange with protection,” the president said.

On Tuesday, British judge Emma Arbuthnot refused to lift the arrest warrant against Assange for violating the terms of his parole when he took refuge in the Ecuadorian embassy in London almost six years ago. Arbuthnot will also decide on February 13 if it is in the public interest to keep the arrest warrant against the founder of WikiLeaks at the request of his lawyers and Sweden, which no longer claims Assange as a suspect of sexual crimes.

Financing with new debt Moreno said that Ecuador requires financing this year of some 8,000 million dollars and that to obtain them it plans to issue bonds and resort to multilateral credit agencies. He asserted that “it is impossible for us to get ahead if we do not have financing for the investment.” The total amount includes 3,000 million bonds that this country placed in mid-January in international financial markets. (I)

Adrián Maruri, the ecuadorian who lent his hands to ‘coco’