In the middle of the discord, an essential coincidence appeared. The president, Lenín Moreno, issued Decree 894 last night and canceled the elimination of the subsidy for extra gasoline and diesel that return to their previous price. 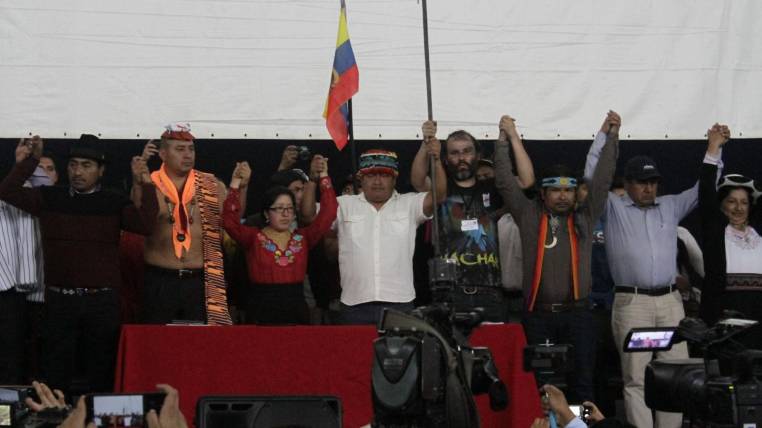 With this, the first point of the agreement reached by the Government and the Confederation of Indigenous Nationalities of Ecuador (Conaie), on Sunday night, and whose fulfillment is under the observation of the Ecuadorian Episcopal Conference (EEC), United Nations and the Joint Command of the Armed Forces. The latter by public request of the indigenous.

The decree with the repeal could not be drawn up on the same Sunday, as requested by the indigenous, because several processes such as legal and technical assessment, in addition to the codifications of the regulations must pass through the Legal Secretariat of the Presidency.

“They will have to normalize (return to their previous state) all the tariffs of gasoline, diesel, tickets and if there was a rise in the products of first necessity they have to normalize”, said yesterday the president of the Conaie, Jaime Vargas before knowing The presidential decision.

In the second point of the Decree, the president provides for the elaboration of a new regulation that allows “a subsidy policy with a comprehensive approach, with criteria of rationalization, targeting and sectorization”. While this is resolved, the prices of extra gasoline and diesel will return to the values ​​before October 1, when Decree 883 was issued, which led to street protests. Prices returned to the previous values ​​from midnight today.

At this point, which is also the last of the agreement reached on Sunday, the indigenous people agree that in the future there is a need to review the subsidies that persist on both types of fuels.

The leader of Cotopaxi, Leonidas Iza, said yesterday that it is necessary to work on the policy of subsidies “because it is not possible that subsidized fuels be used for smuggling and drug trafficking. Nor can it be that those who have more take advantage of this benefit, ”he said.

This coincides with the Government’s speech that justified the issuance of Decree 883, among other things, to stop the traffic of gasoline and diesel across the borders, which leaves millions of losses for the State and profits for criminal groups.

Who are working on the elaboration of this new decree together with the Government, on the side of the Conaie, is a secret. Yesterday, the leaders failed to talk about the identity of their representatives.

However, one of them would be the former Minister of Economy, Pablo Dávalos, who on the day of the negotiation sat on the side of the indigenous leaders. Yesterday, he wrote: “a new decree is proposed in the future that will establish a new way to rationalize subsidies without affecting the poor and without altering the economy.” In the technical tables also the president of the Conaie, Jorge Herrera, among other leaders could be seen.

In the same vein, President Moreno pronounced that, in his Twitter account, he informed: “In the next few hours I will repeal Decree 883. We have made an election for peace. A new decree will be issued to ensure that resources reach those who really need them. ”

Out of these two points, there is nothing else in the agreement. For example, the departure of the cabinet of the Minister of Government, María Paula Romo, and the Minister of Defense, Oswaldo Jarrín, is more a request than a consensus with the Executive. Yesterday, Vargas insisted that the dismissal of both officials, whom he accuses of having violently repressed the protesters, would constitute an act of justice of the Government of Moreno.

For today, workers’ unions were convened by the CCE and the United Nations to begin a process of dialogue with the Government. The members of the Unitary Front of Workers (FUT) confirmed yesterday that they will attend the call of the mediators. The trade unionists ask that the Government refrain from sending the Labor Reform project to the Assembly, without a consensus with social organizations.

Álvaro Noboa calls to remain calm and support the Government