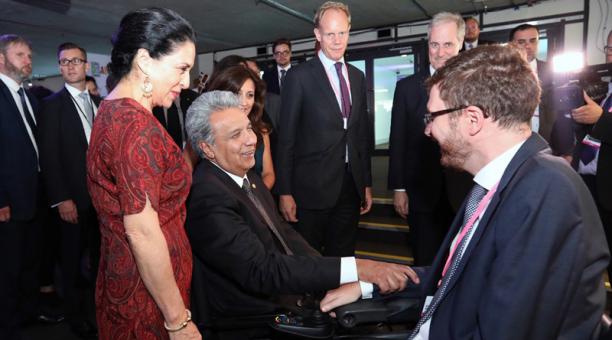 The official agenda went to the background. The visit of President Lenin Moreno to the United Kingdom generated international expectation for the case of Julian Assange, who has been asylum in the Ecuadorian Embassy in London since 2012.

Despite the repeated announcements of Ecuadorian diplomacy for diverting attention from this case towards an event on disabilities, the arrival of Moreno in British territory was a wave of rumors about the future of Assange, asylum in the Embassy of Ecuador in London, since June 12, 2012.

Yesterday morning, on the outside of the delegation Diplomatic located in Knightsbridge (central London), media and some supporters of Assange were posted. Since the weekend, several British publications said that Moreno’s official agenda was a “cover” before the real interest of the trip: to solve the case of Julian Assange.

The English newspaper Daily Mail, for example, reported that “an agreement between Ecuador and the United Kingdom to deliver Julian Assange is imminent.” That agreement, according to the English press, would be to end the asylum and surrender Assange to British justice. Last weekend, the English media The Intercept and the American Slate reported, attributing sources to the Ecuadorian Foreign Ministry, that the strategy is to remove Assange from the Embassy.

The legal mess of the ‘hacker’ of Australian origin with the United Kingdom goes back to 2010. In that year, he was in that country when the Swedish justice requested his extradition for a sexual crime and had to appear before a judge on a regular basis.

But, upon entering the Embassy of Ecuador – in 2012 – he stopped reporting to the judge, which is a crime in that country. Currently, despite the fact that Sweden put aside the charges, Assange could be captured and extradited to the US, which also requires it for disclosure of information through the Wikileaks portal.

The Ecuadorian Foreign Ministry dismissed the supposed interest in Moreno’s trip. He assured that “the Ecuadorian State will only talk and promote understandings about Mr. Assange’s asylum, within the framework of international law, with the lawyers of the interested party and with the British government”.

In addition, he ruled out a short-term or long-term solution. Thus, Ecuador demarcated the scope of negotiation on Assange: USA. You are not invited to the meetings that are held in this case. This, despite the fact that Carlos Poveda, Assange’s lawyer in Quito, told this newspaper last week that the United States should be part of these dialogues. Kenneth Roth, director of Humans Rights Watch, considers that if Ecuador expel Assange from his Embassy, “it is essential that the United Kingdom does not become part of any US effort to prosecute him for merely publishing information regularly in the same way that journalists ”

José Ayala Lasso, former Ecuadorian chancellor, recalls that the US he has no trial initiated against Assange, so there would be no alleged extradition. Thus, there would be no reason for Washington to get involved in official dialogues about Assange’s asylum.

Yesterday, Poveda said that in the last 10 days his team has sought a meeting with the Foreign Ministry, but there has been no response.

President Moreno attended yesterday – in London – the official reception of the Global Summit on Disability, whose sessions begin today. He is scheduled to deliver a speech at the Summit today. He will meet with the Argentine vice president, Gabriela Michetti. Tomorrow he will go to the University of Edinburgh and will attend the Business Encounter of Energy Investment. Then he will travel to Spain, where he will be received by King Felipe VI, will meet with his Spanish counterpart, Pedro Sanchez, and will sign agreements. According to Andres Michelena, Secretary of Communication, there is a diplomatic team to reverse the speech of a supposed political persecution of former President Rafael Correa. (I)