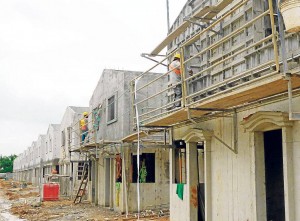 For builders 2015 ends with real estate projects stopped or progressing at a slower pace. Besides debts to suppliers and state agencies such as the Ecuadorian Institute of Social Security (IESS) and the Internal Revenue Service (SRI for its Spanish acronym).

Enrique Pita, president of the Federation of Chambers of Construction, says that the sector is the first to feel the contraction of the economy and the last to recover. Thus, since the second quarter of 2015 they felt the effect of the tightening of mortgage loans by banks.

Financial institutions have explained that with fewer deposits in the system they could not keep up the delivery of loans.

Pita adds that there are cases in which the bank warranted a loan for a certain amount and when the builder requested the money, only the half of the approved amount was delivered in various disbursements. This complicated the development of projects.

Jaime Rumbea, executive director of the Association of Real Estate Developers of Ecuador (Apive), explains that in the case of housing projects, the 30% paid by the purchaser as a down payment only covers between 10 % and 15% of the project. The rest is financed by banks and private investors. Therefore, due to the reduction in loans, projects have progressed in a slower way.