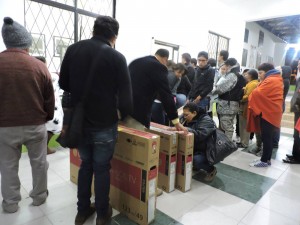 Hundreds of people from Chimborazo, Cotopaxi, Imbabura, Manabi, Guayas and Pichincha crowded the appliances stores of Ipiales and Pasto this weekend after the president’s announcement of charging tariff surtaxes on land borders, as it is done in ports for almost 2,800 items.

The surcharges range from 5% to 45%. Appliances, cell phones, office supplies and wheels for vehicles and bicycles, among others subheadings are levied.

According to the Customs Police on Saturday until noon over a thousand vehicles with destination to Ipiales and Pasto crossed the border.

Expectations in a Pasto store was selling 30 computers on Saturday. Last week the same store sold 20.

The most demanded TVs were and LEDs and curves. But also those were the articles thathad more control at the office of Rumichaca. However, dozens of boxes with those products were observed in the narrow offices of payment. People had to justify the goods as of personal consumption or these would be apprehended.