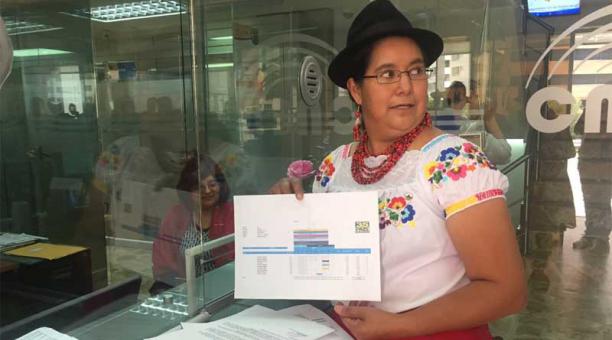 “I am asking for a minimum of a sense of authority,” said the legislator of the Pachakutik party Lourdes Tiban on her complaint raised before the National Electoral Council (CNE). On March 16 she requested that the television spot of the Alianza Pais campaign, which uses her image, is immediately suspended. In that video, the President and Vice Presidential hopefuls of the government´s party Lenin Moreno-Jorge Glas, use old statements of Tiban against the opposition candidate Guillermo Lasso.
Tiban rejected that a message with her image, and paid with state resources, had been used, “to insult.” The spot is authorized to be broadcast from March 10 to 17 on all television channels in prime time, the legislator assured. The former militant of the Pachakutik party recalled that the CNE must authorize all campaign spots, and questioned how those that use the images of opponents in the electoral contest could be allowed.
“Aren´t they embarrassed of using our images, aren´t they ashamed of using the image of national leaders, who have been insulted, criminalized, offended, denigrated by them? And today, using this image, they try to win the campaign,” she stated.Tiban indicated that she could also initiate other legal actions, even of a criminal nature, against those responsible for using her image in the campaign.

“The document submitted to the Council says “It is not possible Mr. President (Juan Pablo Pozo) that the government, represented by the Alianza PAIS party, taking advantage of its best ally (the CNE), ‘can make a dirty campaign video’ using my personal image without my authorization.”

The Recycob company will manage the portfolio of the closed banks