Luis Noboa: Cevallos and Alfaro Moreno can not be candidates of the Barcelona presidency 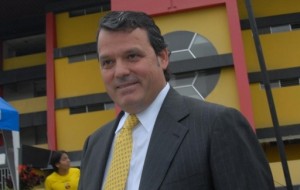 During an interview on Radio City, the candidate for the presidency of the Barcelona Sporting Club, Luis Noboa, said that the rival duo formed by Jose Francisco Cevallos and Carlos Alejandro Alfaro Moreno, “are not eligible” to be candidates for the aforementiones charge.

“The recent statute that took effect more than a year ago has new rules which allow me to me to be a candidate but what must be clear is that Jose Francisco Cevallos is not eligible to run for president of Barcelona nor Alfaro Moreno,” Noboa said.

According to the statute, a candidate who aspires to chair the club should be a member of the institution for at least five years “uninterrupted.”

Noboa,  revealed that Cevallos was did not paid his membership fees for four months. “The statute says that if a person stops paying his fees for four consecutive months he will lose his membership,” said the current vice president of the bullfighter team.

The officialization of candidates for the presidency of Barcelona SC starts