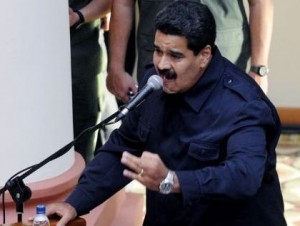 “I have decided, and so i advert, to the open conspiracy, I have decided to break political and diplomatic relations with the current government of Panama and to freeze all trade and economic relations at this time,” said yesterday the Venezuelan president Nicolas Maduro.

The message refers to the rupture of diplomatic and political relations with Panama, after such country’s president, Ricardo Martinelli, convened a special meeting within the Organization of American States (OAS), to discuss violence during the anti-government protests that have left 18 deaths in Venezuela.

“We will not allow anyone to interfere in our country with impunity, creeping lackey president of Panama,” Maduro said.

Also, Maduro in harsh terms criticized the statements of José Miguel Insulza, General Secretary of the Organization of American States (OAS), about the possibility of sending a mission to the country, noting that the organization shall not enter to Venezuela “not now not ever. “

On his part, The Ambassador of Panama in the organization, Arturo Vallarino, announced that the Permanent Council of the OAS will meet today in Washington to analyse the crisis in Venezuela.