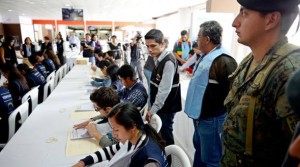 The first phase for a popular consultation which is in the process of manual verification of signatures started yesterday with the forms that the Frente de Defensa Total de la Amazonía ended of deliver last Tuesday.

The collective seeks the no extraction of natural resources in general, in the Amazon.
The Coordinator of strategic management of the National Electoral Council (CNE), Diego Tello, said that at this stage the forms in bad condition, on colored paper or size not admitted by the CNE, among other features, will be left behind. In addition forms needs to have the signature of responsible for the collection.