Many foreigners work as delivery personnel in Ecuador

The rapid growth of home delivery applications in Ecuador has been largely possible thanks to Venezuelan migration, which represents around 50% or more of the delivery people who have made this work their livelihood.

As in other capitals of the world, the boom of this type of services has taken off exponentially, but in many countries of the Latin American subcontinent it has gone hand in hand with the migratory flow of Venezuelans, who have discovered this a labor niche in the receiving countries.

In Quito it is common to see motorists or cyclists at each traffic light carrying the distinctive yellow or green or pink boxes, depending on the best-known companies of these applications, becoming an unthinkable phenomenon just a little over a year ago.

“More than 50% in Quito is of Venezuelan origin, mostly young people who did not have a job opportunity and today have income from a healthy source and that boosts the economy,” Daniel Arévalo, the manager in Ecuador of Ecuador, told EFE. the Spanish company Glovo, from its first headquarters in the north of the capital.

After starting operations in June 2018, this two-story building has become small due to the rapid growth of the brand, which in the first twelve months in Ecuador grew at a rate of 50% each month and has a projection of continuing to do so in around 25% monthly during this second year, says Arévalo.

“We started in Quito, a month later in Guayaquil and four months later in Cuenca,” said the manager before specifying that the second city has become the main market. 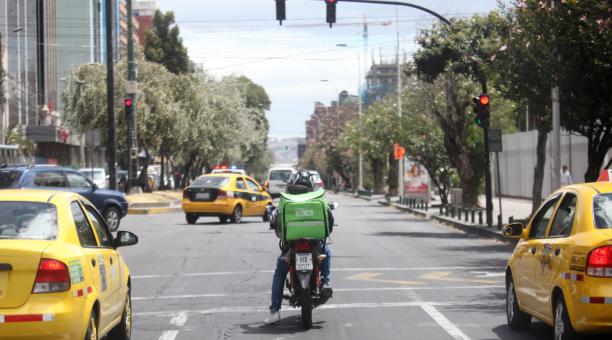 In total, the company has a thousand “glovers” as the yellow box dealers usually call, and a long waiting list, and although it is a “multi-category” application, the main business is in delivery of food at home.

Its distributors, together with those of other companies in the sector, tend to concentrate next to a parking lot in a shopping center in the north of Quito, where they eagerly check their phones waiting for an order or taking advantage, if they can, for lunch. They are distinguished by the hull, the distribution boxes and that accent that moves the observer to any city in the Caribbean country.

“The majority of Glovo’s colleagues are Venezuelans,” Alexei Hernández, 33, of San Cristóbal, who has been in Ecuador for three months, tells EFE. His case is not the usual one, since he is “doing a friend a favor”, since a good part of the distributors have been residing in the country for one to three years, since it is one of the requirements to have an Ecuadorian visa or ID, motorcycle license, criminal record or electronic signature to invoice.

In Ecuador, a country that is going through moments of economic slowdown, between 350,000 and 400,000 Venezuelan citizens have settled in the last two years, and getting a job is not an easy task.

In some cases, the work of a delivery man has become even a family business and it is not uncommon to see the driver, the woman carrying the box and in between a child in the same motorcycle.

And it is that unlike what happens in other latitudes, where the messengers are usually students or young people looking to get extra money, in Ecuador the distribution applications have become a full-time job for emigrants.

“More than a way out, it is a job that helps us to emerge, reach the end of the month and help our families in Venezuela,” says Jason Javier De Gabardila, 27, of the state of Táchira and based in Ecuador since 2016.

He started a year ago with a bike and today he has a motorcycle. And although he points out that he can comfortably organize his schedules, he works an average of twelve hours a day. The Uber offices in Quito have also comings and goings of Venezuelan citizens who, as recognized by the employees of the US company, are the majority not only in the field of distribution but also in the transport service, not yet legalized in Ecuador.

The Caracas-born Douglas Ramos, 35 years old and three in Ecuador, decided to get fully into the home delivery after seeing that “he had given money to some colleagues” and manages well with the bike taking between 40 to 45 hours per week.

On working conditions such as “benefits or economy” he prefers not to speak, although he defends that it is “honest, honest work, which is what people are really looking for”.