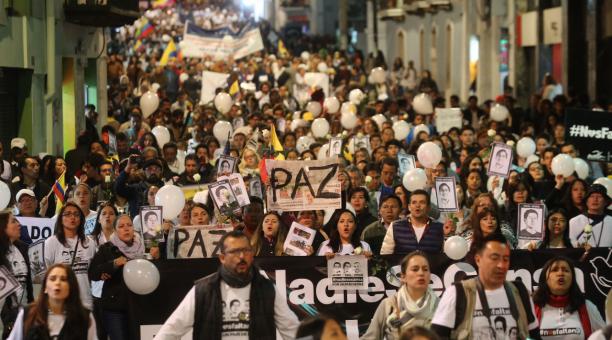 In Quito, Guayaquil, Cuenca, Ambato, Ibarra, Santo Domingo and other corners of the country, hundreds of citizens took to the streets and squares to pronounce themselves for the cessation of violent events that have occurred in recent months on the northern border.

In the capital, family members, friends and co-workers of Paul Rivas, Javier Ortega and Efraín Segarra led the call for a peaceful country. University students, mainly from the fields of Social Communication, Journalism and Social Studies, also joined this call.

The march began at the Arco de la Circasiana, north center of Quito, at 5:30 p.m. After a tour to the Historic Center, they arrived at 19:30 at the Plaza de San Francisco.

At that time, the Plaza Grande was occupied by participants of another march organized by the National Government. At the same time, the marches started and the plantings began in other cities. Social groupings, aid groups and citizenship in general joined this mobilization.

Nobody gets tired, Come back, For a country of peace, Rescue all and other messages were seen in posters, pages of newspapers and banners alluding to the return of the atmosphere of peace in Ecuador. Through different slogans, the necessary actions were also requested for the return of the bodies of the three journalists of EL COMERCIO, as well as the release of the last two persons kidnapped.

With candles, balloons and white garments was also reminded the four soldiers who lost their lives while performing surveillance and patrol in San Lorenzo. Communicators, photographers and journalists carried the photos of Efraín Segarra, Paúl Rivas and Javier Segarra. (I)