Marisa Sanchez´ Company was chosen for a contract with the Secretariat of F. Ehlers 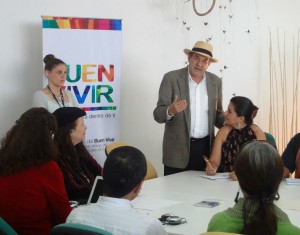 The company Activatv Audiovisual Communication, owned by Marisa Sanchez Dunez, was awarded a contract for $ 250,950 to produce thematic reports of the Secretariat of Good Living, an institution administered by Freddy Ehlers, Sanchez´ former boss at La Television TV show.

The contract was signed on February 20 by the financial administrative general coordinator of the Presidency of the Republic, Gustavo Blum Andrade and Luis Enrique Bayas Panchi, general manager of Activatv Communication Studies and former adviser to the Assembly in 2011.

The contractor, as agreed, should have produced until August 14, 25 chapters of the Love life-Good Living TV show, conduct 22 interview and opinion spaces, comply with at least four international fairs  or acts coverage related to the Secretariat of Good Living and make documentary films lined up with the Good living thematic.

The show airs on Ecuador TV Channel 7 under the leadership of Freddy Ehlers, according to the TV station scheduling.

The Activatv Company, which has signed other contracts for the Love Life-Good Living TV show, records 35 clients on its Web site. The Ministry of Tourism, the Assembly and the Ministry of Communication are listed among them.

Banana unions of the Andean area demand a better treatment