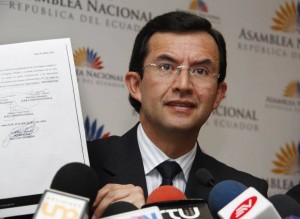 The Judge Maria del Carmen Maldonado, rapporteur of the case, called for a public hearing today, regarding the two lawsuits filed against the Communication Law, which entered in substantiation phase at the Constitutional Court.

The claimants should explain the fundamentals of their actions during the meeting, which was convened at 09:00 in the Audience Hall of the entity Headquarters, in Quito.

Besides the presence of the litigants, it is expected that representatives of the Legislative and Executive functions, who processed the legal body to impugn , attend the session.

The demands were made by legislator Luis Fernando Torres, of which the first was admissible since July 12, 2013, while the second was filed by a group of 60 citizens, including academics, journalists, artists, writers and political activists.

Meanwhile, Torres raises the unconstitutionality of about 50 items, arguing that its content were not discussed by the plenary of the Assembly before being submitted to a vote.