Medias Have Been Attacked 272 Times in Three Years 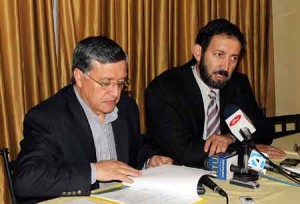 Freedom of expression has been affected again. The seizure of computers in Vanguardia magazine amount the aggression 272 that medias and journalists had suffer in the past three years.

On Friday the Trusteeship “CFN-AGD No más impunidad” evacuated the office where the magazine operates.

This is the sixth time journalistic materials are destroyed or confiscated in 2010 by public authority organs, according to NGO Fundamedios.

The seizure was done because an alleged rent debt of $ 14.556. Editor in Chief of the magazine, Juan Carlos Calderón, says that he has collected testimonies from people who confirmed that computers are being reviewed by people strange to AGD (Deposit Guarantee Agency).

Fundamedios director, NGO that monitors freedom of expression, believes that the fact shows the short interest that the state has to ensure the good journalism.

Andres Crespo, president of the magazine, in a dialogue with Daily Expreso said that the payment have been already done through a Tenancy court. So he asks government authorities to allow the entry of technicians to the place where the computers are in order to protect the information stored on their hard drives.