Meeting to treat situation in Venezuela was suspended 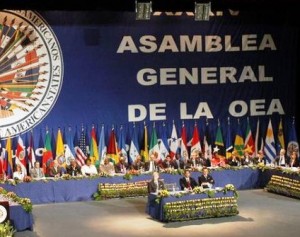 The Permanent Council of the Organization of American States (OAS), decided today to suspend for a few hours its extraordinary meeting about Venezuela, without reaching an agreement on the draft of the joint declaration, and after dismissing the possibility to convene a meeting of Foreign Ministers soon.

At 06:30 today, and after eight hours of private session, the ambassadors of the Member States of the OAS, suspended the session until 15:00 today, given the lack of consensus on several points of the declaration, including the call for a dialogue between the actors in Venezuela.

At the exit of the meeting, the Ambassador of Panama to the OAS, Arturo Vallarino, said: “There was no agreement in the Permanent Council and the session continues tomorrow (today), and we still do not know what will be the results.”

The peruvian initiative, supported by Panama, Chile, Mexico, Canada and the United States, was rejected outright by the ALBA group, and then, the Bolivian authoring draft did not even came to a vote, said the Panamanian representative.