Santos seeks reelection to continue the peace process with the FARC 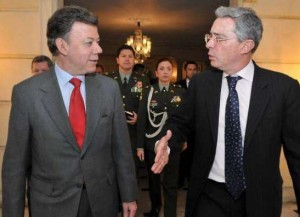 The elections this Sunday, March 9, have to the president Juan Manuel Santos, promoter of dialogue in the peace process with the FARC, as the fixed candidate for the presidential election in May.

Santos, whose center-right bloc has a comfortable majority in Congress, seeks to maintain legislative support to continue negotiating with the rebels, a process which began 16 months ago in Cuba.

Although “many Colombians have doubts about it they’re not going to desist,” said Sandra Borda, a political science professor at the University of the Andes regarding the subject of the peace process, which she qualified as key.

Meanwhile the candidate Alvaro Uribe, who broke politically with Santos following negotiations with the FARC, is the great unknown in this process by ignore the vote, which he will reach. Uribe described as “terrorists” to the FARC and accused of treason to Santos for his peace proposal and was erected as the strongest opponent of the government.

Colombia will have 32 million qualified persons to vote voluntarily and abstention currently is around 50%.