Because it is considered that in a CD sent by the United States Department of Justice, for the process investigating the crime of organized crime in the Las Torres case, there would be important data related to the facts investigated, the Prosecutor’s Office asks the judge of the case, Felipe Córdova, of the National Court of Justice, authorizes the recognition, opening, exploitation, analysis, extraction, transcription and materialization of the information contained in the device. 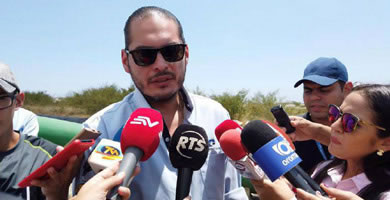 The information is part of the international criminal assistance provided to the Attorney General of Ecuador by the United States Department of Justice. The request to dematerialize the information contained in the device is part of the first impulse in the case that a criminal structure that operated in the General Comptroller of the State, Petroecuador and the general secretariat of the Presidency of the Republic is being investigated.

From the United States comes information related to the Las Torres case, because in that country the Ecuadorians Raúl de la Torre, a relative of the comptroller Celi and former Petroecuador official, and the real estate businessman Roberto Barrera were sentenced. Both agreed in that country to have mediated in the payment of bribes in a corruption network in Petroecuador.

Raúl de la Torre and Roberto Barrera are two names that appear throughout the versions and information that exists in the Las Torres case file. For example, Pedro Crespo, a shareholder of the Nolimit company, rendered a version in this case, which was used by the attorney general, Diana Salazar, as one of the 16 elements to formulate charges against the now nine defendants.

Crespo recalled that at the end of 2018 Barrera and De la Torre appeared on the scene with José Luis de la Paz, a representative of the Nolimit company, who was arrested in the United States and confessed to having paid $ 8.8 million in bribes for Petroecuador contracts. According to the version, the first two offered to manage the payments that were pending from Petroecuador.

Nolimit, a Petroecuador contractor, needed the payment of payroll for works carried out, but for these to be carried out from the state oil company it was necessary to have favorable reports from the CGE. There, the structure came into operation by offering to clean up or remove the Comptroller’s reports in exchange for the payment of a bribe that had to be delivered to De la Torre, for example.

Confirmed a favorable report or the fading of a gloss, Petroecuador gave way to release the resources that it had to pay in this case to Nolimit. From the Prosecutor’s Office it is presumed that at least five glosses related to Nolimit for approximately $ 13 million were vanished by direct order of Pablo Celi.

Pedro Crespo, a shareholder of Nolimit, said in his version that De la Torre and Barrera would have asked that the money that was going to be paid to them be delivered in cash in Ecuador, but the shareholders proposed transfers in the United States. After that meeting in the United States in which the payments were established, Raúl de la Torre told Nolimit shareholders that he had arrived in that country without money and asked for $ 30,000 in cash.

Several of the purchases for De la Torre would have been made in Miami with a credit card from one of the shareholders. Among the objects that would have been acquired were a Rolex watch for $ 13,000 and two purchases for $ 5,000 each in clothing and electronics stores. According to Crespo, all the receipts and vouchers for those purchases were turned over to the United States authorities.

Finally, Crespo, when asked by the prosecutor about the names of the beneficiaries of the money that Raúl de la Torre was going to receive, replied that De la Torre himself mentioned “Mr. Esteban Celi, who I know is an uncle, Mr. Pablo Flores, Mr. José Agusto Briones for the names I remember ”.

The businessman Roberto Barrera in his version given last Monday before the Prosecutor’s Office said that it was Raúl de la Torre, in mid-2018, who introduced him as a friend to José de la Paz; while Pedro Crespo said that he was together with De la Paz when he was introduced and two other people he did not know.

Barrera denied having had any financial or business ties with De la Paz, but acknowledged that in a meeting in which he intervened it was because José Luis de la Paz had offered Raúl de la Torre a commission for a payment favor. The meeting would have been to indicate how they were going to pay and they discussed topics that he also did not know. (El Universo)