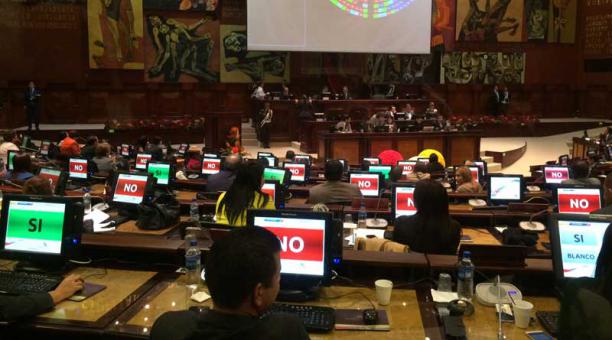 Almost all the first of the lists sent by President Lenin Moreno, for the Council of Transitional Participation, were elected yesterday, February 28, 2018. An exception was Manuela Gallegos, founder of Alianza País and leader of La Mariscal, in the center -north of Quito.

On the eve, Creo had warned that he would not vote for people who have had a ‘correísta’ past.

That bench has 21 votes; enough to influence the final decision of the Plenary. The Social Christian Party (PSC), which has 15 seats, abstained. Gallegos, who maintains that he disaffiliated from Alianza País in 2010 due to divergences with former President Rafael Correa, reached 44 votes in favor, 43 against and 42 abstentions.

In his place the second of the short list, the colonel Luis Hernández was possessed. Another novelty that was presented in the process was the appointment of the second person in the seventh list.

The first one was not moved for the vote (Mariana Alcívar Alcívar), but it was directly passed to the second: Myriam Félix López. The legislators were not obliged to follow an order when it comes to motions to people. In the end, Felix Lopez was appointed. The new authorities are: Julio César Trujillo, Luis Macas, Luis Hernández, Pablo Dávila, Xavier Zavala Egas, Eduardo Mendoza and Myriam Félix López. In the annexes to the referendum that was approved by the Ecuadorians, there was no mention of whether the Participation Council should have alternates.

The legislator Rodrigo Collahuazo, of Alianza País (AP), proposed to the Plenary that they be elected – based on a previous request of the Legislative – and moved seven names. He suggested voting on the iron, but his proposal did not prosper. The president of the Assembly, José Serrano, suspended the session and convened the legislators for next Tuesday, at 06:30.

Then, it is expected to continue with the appointment of the seven substitute counselors. Also, the debate to know if Serrano and the attorney general, Carlos Baca Mancheno, will appear before the Assembly to explain a filtered audio, where the Legislative head and former Comptroller Carlos Pólit are heard. In the session on Tuesday, a third point will also be included that has to do with the murder of Héctor Aguavil, ex-governor of the province of Santo Domingo de los Tsáchilas. The request had been presented in the afternoon by Assemblyman Angel Gende.

The decision of Serrano provoked the rejection of the opposition groups. Its members raised their voices in the Plenary, but they could not avoid the end of the 499 session. The majority of assembly members did not leave the place, because immediately details were finalized for the possession of the new councilors.

The Secretary of the Assembly, Libya Rivas, informed that in “minutes” the next Plenary would be installed to occupy the councilors. Two hours later, session 500 still could not be installed. Rivas justified that one of the reasons for the delay was the presentation of the sworn statement of his assets. That requirement was indispensable to proceed to possess the seven transitory advisors.

The act of possession lasted 15 minutes. There was another novelty were only five of the seven designated: Julio César Trujillo, Luis Hernández, Pablo Dávila, Xavier Zavala Egas and Eduardo Mendoza. Myriam Félix and Luis Macas were not possessed since they were outside of Quito. This act is held today, at 10:00, before the Plenary Assembly. According to the annex of question 3 of the referendum and popular consultation, this Council must evaluate the performance of the authorities designated by the Council for Citizen Participation and Social Control that was ceased. They have been singled out for allegedly not acting independently. At least 16 national authorities could be dismissed if they do not pass the evaluation carried out by the Council. For example, the Attorney General, the Comptroller, Public Defender, the members of the National Electoral Council (CNE).

Also the Superintendent of Companies, Communication, Territorial Planning, among others. To meet that goal you will have a maximum of six months from installation. It is expected that today they can go to the building where the Council works and start the work. Another task of the Council is to move forward with the contests that are pending. The partial renewal of the CNE, for example.

For this process, the citizen selection committee has been formed to accompany the contest. The call for candidates is pending. The election of the Comptroller General of the State must also be developed. In this case the approval of the regulations for the respective contest is pending. In the same way, the Public Defender’s Contest must be done: approval of the regulation is pending. The Council of Transitional Citizen Participation will have as a third task to improve the mechanisms of citizen participation and transparency. (I)