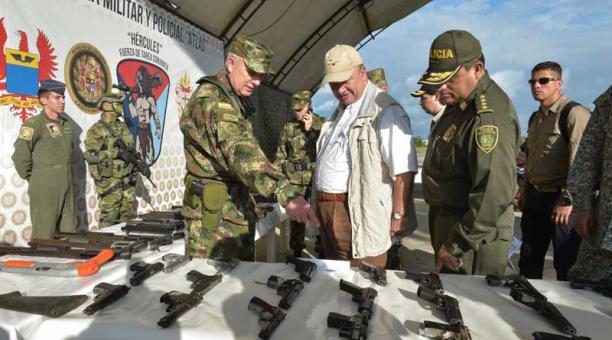 The M4 rifles have a range of up to 700 meters. They are equipped with thermal or infrared sights. For this reason, the M4 is considered militarily as one of the most advanced weapons sold in international markets. Now, they are in the hands of the dissidents of Colombia.

The Ministry of Defense of that country revealed that during the last two months, the Óliver Sinisterra Front appealed to the cartels of Mexico to stock up on these illegal cargoes. In a single operation, mounted four days ago on the border between Colombia and Ecuador, the public forces found three of these high-powered rifles.

The investigations determined that they came from Mexico and that they were requested by alias ‘Guacho’. In that incursion were also found revolvers, pistols and ammunition of different calibers.

Colombian soldiers told EL COMERCIO that this shipment exceeds USD 20,000, since only one rifle is valued at more than USD 4,000. The soldiers said that the chief of the dissidents seeks to reinforce his men, to avoid being captured by the forces of the order of Ecuador or Colombia.

The head of the dissidents is one of the most wanted men, he is considered responsible for the terrorist attacks in San Lorenzo and the murders of four sailors and three journalists of the el comercio newspaper. He is also credited with the plagiarism of a couple, who until now is not known where they are.

In Ecuador, the military also has information about the support that the insurgent receives from the Mexican cartels. Ecuadorian agents told this newspaper that the strong police and military guard on the northern border caused that the routes that were in Esmeraldas were closed so that the armed ones could operate as they did.

That means that the drug cannot leave either and the weapons they receive also serve to protect those charges and prevent them from being seized. For this reason, Mexican networks have also delivered explosives to strengthen security.

With all this material, the irregulars protect the drug laboratories that have set up in the jungle zone of Tumaco-Nariño. The dissidents built an infrastructure to produce cocaine, whose investment exceeds 800 million pesos. In fact, the day the rifles were seized, Colombian military forces also found a clandestine laboratory of ‘Guacho’. The facilities were underground. There was found an arsenal of explosives and gasoline.

In April, the Colombian military seized a warehouse containing more than 15 large-caliber weapons belonging to FARC dissidents. In the operation were machine guns, rifles, grenade launchers, grenades, cartridges and other supplies. The entire seizure occurred in Tumaco, a Colombian municipality that faces Ecuadorian towns such as Mataje, in Esmeraldas.

For that reason, the Ecuadorian agents say they are alert to the entry of war material. Before security was reinforced at the border, researchers found that Ecuador’s rivers and mangroves were used for arms trafficking by those who did not embrace peace.

An investigation of this newspaper, published last February, revealed that the person responsible for the dissidents had weapons caches in the Mataje river and that he even sold explosives to the ELN. For this reason, earlier this month, the ex-commander of the Police, Ramiro Mantilla, indicated that one of the challenges of the institution was to set up a fluvial patrol to monitor the rivers that cross the cordon border with Colombia.

Alerts announcing the presence of the Mexican cartels in the border area of Ecuador were initially lit in 2016. That year, the US Department of State. He explained that “transnational criminal groups, including the Zetas, Sinaloa and Gulf cartels operate in Ecuador.” A year later, the Mexican Attorney General’s Office said that the Sinaloa, Los Zetas, Familia Michoacana and Gulf Cartel are in the country.

On May 6, the then commander of the Police, Ramiro Mantilla, said that the Government allocated USD 8 million for the purchase of police equipment. The idea was to reinforce the control of rivers and roads, to prevent the mafias from operating. (I)