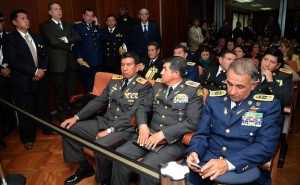 The presence of the current leadership of the Armed Forces and military officers in passive service caused a huge surprise yesterday in one of the rooms of the National Court of Justice (CNJ), where it was expected that the trial stage began in the first process by alleged crimes against humanity that still occur in the country.

They came to support former militaries Manuel A., Nelson E., William R., John V. and Mario A., and other former police agents accused by Luis Vaca, Susana Cajas and Javier Jarrin, members the disappeared group Alfaro Vive Carajo (AVC), of being arrested and tortured in 1985 for acts of subversion.

The judicial process was convened by national judge Silvia Sanchez, knowing that Mario A. would not attend due to a “collapse” -he was hospitalized since early yesterday morning at the hospital of the armed forces- she decided not to install the court, without determining a date for a new call. This outraged Juan Pablo Alban, defense attorney of Vaca, Cajas and Jarrin, who left the room annoyed.

TV channels broadcast news of the crimes against humanity trial