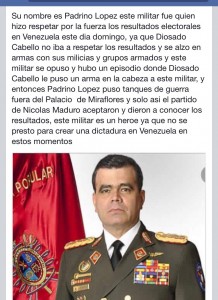 Parliamentary elections in Venezuela, held last Sunday, gave the opposition a greater representation of deputies in the National Assembly.

An audio recording circulating on social networks, says that Diosdado Cabello, president of the Venezuelan National Assembly, made an attempt to change the results of the polls.

“Yesterday we were about to lose everything. Diosdado Cabello came away with his militia and was not going to respect the results, and Padrino López confronted him” – it can be heard in the recording- “Padrino Lopez did not accept it and took out the tanks and parked them in front of the Miraflores Palace, and only then, they accepted the results.”

Vladimir Padrino Lopez is the Minister of Defense of Venezuela, who congratulated the civic behavior of the electoral process, held this Sunday to elect 167 deputies for the new legislative term of the National Assembly.