Romulo Aguilar: ‘I did not accept that Vinicio Luna returns to the FEF’ 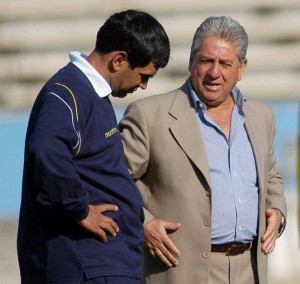 Romulo Aguilar, president of the Arbitration Commission of the Ecuadorian Football Federation (FEFfor its Spanish acronym), in an interview with La Voz radio station _ of Tomebamba, Cuenca, talked about some issues they discussed yesterday at the Executive Committee, without president Luis Chiriboga, who is suspended from office for 90 days to be investigated by the Ecuadorian Prosecution.

“We will surely receive a delegation of the clubs that met yesterday, they are requesting to include the Professional Football League in the Congress (January 2016), they know that we have never denied any request,” said Aguilar.

The reporter asked why the Ecuadorian Federation incorporated again Vinicio Luna, who years ago was convicted and served a sentence for attempted migrant processes, and now is recaptured by the National Police for investigations following a report by the US Attorney Loretta Lynch.