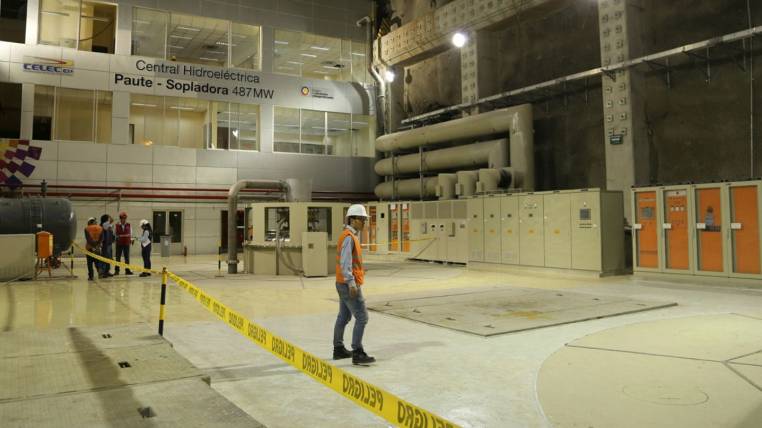 Delays, faults in the works, overpricing. The list of irregularities around the works of the previous government grows daily. From the electricity sector, for example, a new claim is added that generates complications and fines.

The Sopladora hydroelectric dam, one of Rafael Correa’s emblematic works, started in 2011 and took five years to be ready. On August 26, 2016 the plant was inaugurated, but complementary works and equipment were left to continue and conclude.

To date, those works continue without results. The responsible? According to the Hidropaute Business Unit, entity in charge of the management of Sopladora, the CGGC-Fopeca consortium had to carry out the complementary works, but there are no conclusions. Guillermo Utreras, assistant manager of the Sopladora project, notified of the breach since the beginning of the year. In January, he says, the company of Chinese origin did not finish its work. However, no legal punishments or sanctions have been applied.

The lack of solution caused that on March 14 Utreras report – through a memorandum that EXPRESO had access to the general manager subrogante of the Electric Corporation of Ecuador (Celec), Jorge Moscoso, the existence of accumulated fines that must be charged to the consortium. As of that date, these fines for non-compliance and arrears exceeded $ 305 million

The novelty was also communicated to the Ministry of Renewable Energy and Electricity.

Utreras reported that “the contractor unfortunately fails to comply with the termination of the corrections that must be made, which makes it impossible to sign the contract for the provisional reception of the contract.”

EXPRESO tried to communicate – via telephone and email – with the consortium but, until the close of this edition, there was no official response. Nor was there a pronouncement, despite the request of the Embassy of China in Ecuador.

Not only are the fines to be collected. The exit of the private company with works to be completed calls into question the correct operation of one of the eight hydroelectric plants promoted by the previous government. According to a report presented on February 14, there are pending that generate electromechanical failures that must be repaired immediately.

These remedial works will cost more than 10 million dollars.

Miguel Cordero, manager of Celec-Hidropaute, detailed the inconsistencies and elaborated a series of alternatives to continue with the work from the public sector.

This newspaper tried to communicate with the Minister in charge of Electricity, Carlos Pérez, to know the results of the public intervention in the energy work. Celec and the Hidropaute business unit had to act in an emergency to prevent the plant, which generates 487 megawatts of power, from working. The minister still does not respond to the request for official information.

The Superintendent of the hydroelectric project determined that part of the contract with Fopeca had unfinished, incomplete and unacceptable areas. Those determinations generated the fines that are tried to be charged.

The representatives of the Ecuadorian electric companies seek, according to the communications sent to the authorities, forms of payment and termination. “It is essential to find the most expeditious way to proceed with the closing of contracts.”

The departure of the consortium of Chinese origin from the Sopladora hydroelectric plant has not yet generated complications in the delivery of electric service. Repairs and care, however, are urgent. (I)

Paco Velasco accused of being the nexus between the FARC and Correa; he denies it