Minister for Industrial Relations will carry out the presidential order 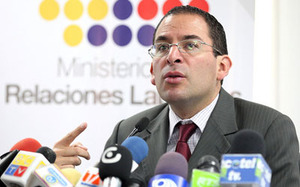 Francisco Vacas, the Minister for Industrial Relations, announced yesterday that there will be meetings with the legal secretariat of the regime to comply with the request made last Saturday by the Ecuadorian President Rafael Correa, to unify the public sector labor system and define lower compensation ‘ceilings’ through constitutional reforms.

Correa maintained that the existing mechanisms are very expensive for the state, which has paid between $ 641 million between 2011 and 2013.

Finally, Vacas announced that in the month of November he will carry out discussions to set the basic salary for  2014. Vacas indicated that native workers earn  on the basis of the unified basic salary, which is $ 318. “No more than 20% earn less than the basic wage,” he said. He also dismissed the proposal made by workers that want a $ 600 base pay. “The Constitution says that the salary should reach progressively the cost of the basic basket … We must be consistent with the reality of the country because the economy could not bear doubling the basic wage.”