Correa signs cooperation pact with Belarus, travels to France and will speak with Unesco 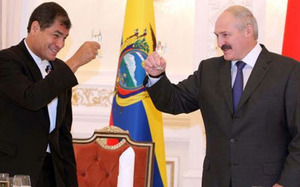 The leaders of Ecuador, Rafael Correa, and Belarus, Alexander Lukashenko, decided to open embassies in both countries in order to take advantage of the early economic and trade cooperation between nations.

“This will help a lot as we are open to great possibilities. I agree that much remains to be done and that we must move quickly,” said Correa, in his first visit to Minsk.

The Ecuadorian president ledge that bilateral cooperation will serve to have better knowledge of oil exploration and extraction to the Belarus Belorusneft and the Ecuadorian Petroamazonas. He assured that the alliance with Belarus would contribute to “the revolution in the fields of technology and production.”

Later Ecuadorian regime leader will come this Friday to Paris where agreements will begin on Wednesday with his French counterpart, Francois Hollande, he also plans to make a full statement to the Unesco, as it was informed by officials last Thursday.

Correa will meet with Prime Minister Jean -Marc Ayrault and President of the National Assembly, Claude Bartolone. On Thursday, November 7, Correa attend a private lunch hosted by Hollande, who will make a joint statement. That same day he will meet with the director of UNESCO, Irina Bokova, then will meet with the Ecuadorian community in the House of Latin America.