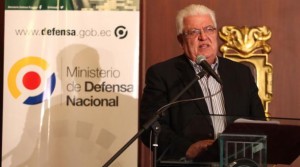 Tuesday afternoon March 1, 2016, Fernando Cordero announced his resignation to the Ministry of Defence.

In a short speech at the headquarters of the ministry, he stressed that his administration has proposed the modernization of the Armed Forces in a planned way and respecting the Constitution and Ecuadorian laws. He also said he wants that a “new era” starts in defense.

Before leaving, Cordero said he has endured countless disinformation campaigns. This morning, radio journalists asked President Rafael Correa in Guayaquil, if he knew about the alleged resignation of Fernando Cordero. The president smiled and declined to answer. (I)

Alleged perpetrators of the death of two Argentine tourists are detained