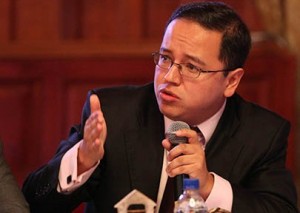 The coordinator minister of the Economic Policy Patricio Rivera, assured that the country’s economy “going very well” and this year will grow by 4% or a “little more” and that the government does not care what it says or does not say the International Monetary Fund (IMF).

“Ecuador has no intention of worrying about what left to say or say the International Monetary Fund” because the country “manages a sovereign policy that is absolutely successful,” Rivera said.

A few weeks ago the IMF revealed a generally positive report on the Ecuadorian economy.

The minister said the only thing that Ecuador is required to do as part of an agreement with the Fund, is “to provide statistical information” because the IMF collects data on economic growth, fiscal accounts, external accounts, among others.

Rivera also dismissed the recurring fears about an alleged Government’s intention to replace the dollar through laws and regard state budget said that is fully funded, “so that there are 1,207 million cash on hand at this time.”