Ten minutes of recess are for Ismael synonymous with freedom. The 7-year-old boy does not use them either to eat or to go to the bathroom. According to his mother, Viviana Bayas, the time that elapses between changing from a third- grade virtual class to another is for playing. 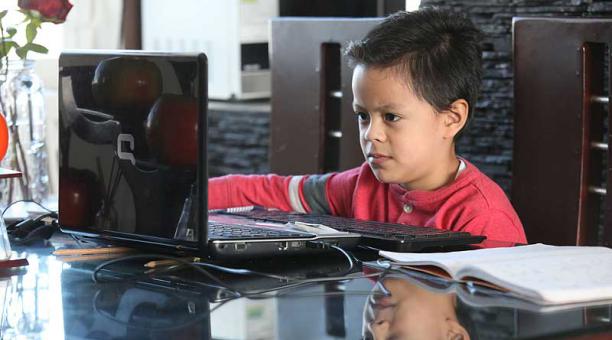 Until Friday, Ismael remained in front of his computer , in four classes, between 07:15 and 10:35. That was his adaptation schedule and from tomorrow he will have an official one.

It is very difficult – Viviana notes – for her son and other children his age to remain attentive to the screen . When she is careless, she plays with the pencil or sticks out her tongue to see herself on camera, in the middle of virtual class. “Mommy, I don’t want to anymore,” he tells her.

To structure the plan We Learn Together at Home , the Education Portfolio considered what was established by the International Pediatric Society and Unesco , regarding time spent on screen.

Thus, children can spend a maximum of one hour; and adolescents , no more than two, a day. All accompanied by an adult (see infographic).

“Setting a schedule based on class hours by videoconference is anti-pedagogical,” says the rector of the Liceo del Valle, Patricio Cevallos. So they compacted the curriculum through experiences of learning . Boys carry out synchronous and asynchronous activities (‘offline’); inquiry and practice of learning predominate, he says. Everything goes between 08:00 and 14:00.

However – he clarifies – it does not imply that they remain seated in front of the screen all that time. They also have a platform for the development of reading comprehension , logical reasoning and problem solving, which they develop in one hour a week.

The attention span varies according to the age of the students , explains the psychopedagogue Cristina Tapia. A child between 4 and 5 years old, he explains, attends the screen for a maximum of 20 minutes, with playful activities.

The use of screens to play or watch movies, he says, does not require the same attentional system that when kids are connected for educational purposes.

Tapia recalls the importance of schools include times of recess in scheduling and conducting active pauses at the beginning and end of each class with stretching exercises or jumps that allow other forms of care work.

On a global scale, it is said that teachers should design productive activities , especially in the case of older students, who carry much of their learning on screens. Balance between tasks is also requested.

The scientific evidence speaks of the damage caused by the overuse of digital devices in brain development . Soledad Garcés, from the Digital Coexistence Foundation, cited by La Tercera, from Chile, recalls that in children and adolescents, the brain is prepared to learn from concrete and real experiences, that is, with the five senses.

Erika Bonilla has contemplated removing Mathias, 7, from school. She stays in front of her computer for six hours a day. “She gets bored, short-tempered and distracted.”

For the mother , all that time is not 100% productive, since, although the teacher is good, she assures that there are things that are difficult to control. “She stops, asking for silence or repeating things already said.”

The pedagogical files of the Ministry propose daily work of 30 minutes in initial and about 50 a day for the rest of the levels. That time is not just about devices.

This period can be complemented with activities proposed by the teachers until completing a maximum of two hours of daily work.

Although Miley has classes from 8:00 to 11:00, with 20 minutes of rest between 40 periods, her mother, Katherine Barrionuevo, worries that she will spend up to eight hours in front of the computer to finish homework . The 11-year-old girl, she says, ends up with a headache and burning eyes.

For Paulina Morales, a university professor, the time recommended by the authorities is not enough to impart knowledge . She advises that campuses organize their schedules with breaks of 20 to 30 minutes. This if the classes last an hour. “This way the boys will reach a balance and understand better.”

The American Academy of Pediatrics modified its recommendations on screen time. The old limits were related to recreational use; Due to the pandemic , technology is indispensable for education. “What matters now is the child, the content and the context.”

The children study at home since 16 March after the emergency declaration. In the 2019-2020 cycle, which ended in June, they began with virtual class schedules, through computers, tablets and cell phones, in addition to homework.