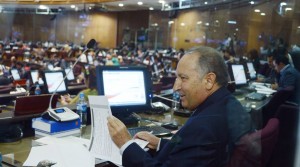 The validity of the Monetary and Financial Organic Code could take up to two months, according to the missing legal deadlines to meet. Although the National Assembly has just approved the legal text, on August 25, the government must punish the document.

The currency code was sent to the Presidency on July 25, the day the text was approved in the Assembly.

According to Luis Fernando Torres (Cambio-CREO), the Organic Law of the Legislative states that after the delivery of the law by the Presidency of the Assembly to the Executive, this has thirty days to punish or object the decision of the legislature.

If the President enforces it, the law would be published in the Official Register and take effect immediately. However, if the Executive were to partially veto the text, it would go back to the Assembly. If so, the Legislative Branch would have 30 days to comment on the veto.

The Code aims to redirect financial credit and to manage liquidity in the economy.

The veto for the Water Law will be discussed tomorrow