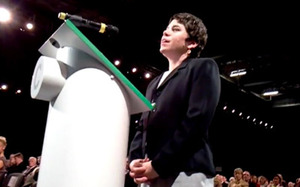 Human rights activist, journalist and expert on the oil industry, Antonia Juhasz, is visiting Ecuador to be part of the list of celebrities who will verify the alleged environmental damage caused by the oil company Chevron.

Among her activities, Juhasz is planning to visit the well Aguarico 4, where Correa launched the campaign ‘The dirty hand of Chevron’ last September.

“I am an expert in cases of Chevron operation and I have studied the strong impact of the oil company,” said Juhasz before the beginner of  the ceremony of the changing of the guards at the Carondelet Palace, which was attended by President Rafael Correa, and Vice President Jorge Glas.

The oil company Chevron maintains around six legal disputes with communities of the Amazon who argue they have been affected by pollution, as a result of the non-remedacion of the oil company. It also has conflicts with the Ecuadorian State