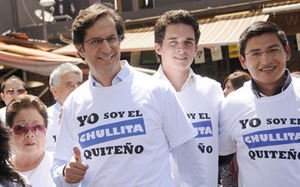 Last Tuesday, Juan Carlos Solines declined his candidacy for the mayoralty of Quito, for the political movement Creating Opportunities (CREO). So said the official in a radio interview and through Twitter.

“I decline my candidacy in favor of Quito and the people of Quito!” said Solines, who also was a teammate for the presidency along with Guillermo Lasso, in the presidential elections held in February 2012.

Solines revealed that his decision is a demonstration for young people to learn to do politics in a different way but maintaining political coherence. “I seek nothing, no political calculation, I’m not looking councils, prefectures, etc.” he said.

There are four candidates for the mayor of Quito, Augusto Barrera, current Mayor of Quito, Mauricio Rodas (SUMA), Jose Vasquez will run independently and Gonzalo Perez will be supported Prian.