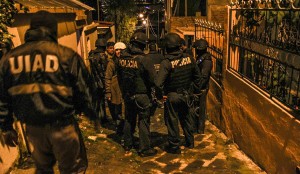 With the arrest held yesterday morning in Manta, in the Manabi province, of an alleged member of the Russian mafia, Vadim P., the Interior Ministry complied with the 100 operations link that proposed in 2015.

Police investigations point Vadim P. as the alleged leader of a network in the Manabi province dedicated to drug trafficking, money laundering, and extortion of other criminal gangs, including those involved in drug trafficking. The foreigner would have entered the country with forged documents three years ago and kept an extradition request by the Russian Federation for drug trafficking in that country, a crime committed jointly with the Russian mafia.

The first rain of the year wreaks havoc in the city